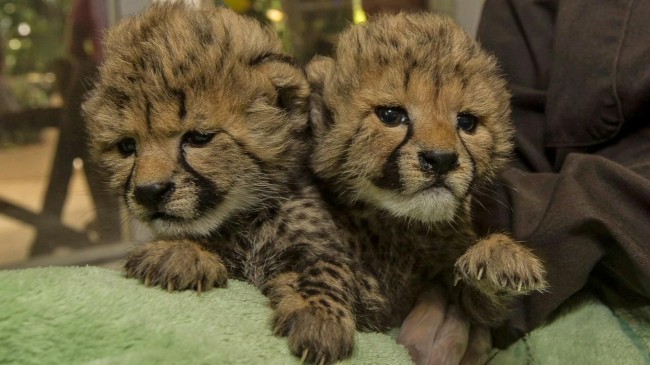 Two female cheetah cubs born earlier this month are being bottle-fed, hand raised by staff, and charming visitors lucky enough to see them at the San Diego Zoo Safari Park. The cubs were born on Sept. 1 at the park’s Cheetah Breeding Facility. However, the mother, Allie, has not been successful at raising any of her litters. As a result, the personnel decided they needed humans to raise the big cat cubs in their Animal Care Center.

Now three weeks old, the cubs are thriving. They are growing rapidly and are full of personality, becoming increasingly active. The cheetah cubs were already swatting and interacting with each other. Their eyes recently opened. The youngsters now weigh around 3 pounds each.

Acknowledging that every baby animal is different, Eileen Neff, lead keeper at the Safari Park, said the “cheetahs really seem to be developing quickly.” Neff reported that the cubs are great eaters who play with each other. They have grown enough to be on display now for a few hours daily.

The Safari Park plans on making these cubs animal ambassadors. They will each be given a dog companion to grow up with, like other cheetahs used as ambassadors for the San Diego Zoo and its Safari Park have been. The domesticated dogs play with the cheetahs and communicate through body language not to be afraid in new surroundings, which helps relax and calm the cubs.

The Safari Park has had great success with playful puppy and cheetah pairings before. They wrestle with each other and toys and become best buddies. The Safari Park animal care experts have previously paired more than six young cheetahs with puppy pals in the past with great success. The first pair involved a male cheetah and female golden retriever who were inseparable for 13 years, until the dog died.

One pairing earlier this year involved a cheetah named Ruuxa and Rhodesian ridgeback puppy named Raina, who were paired at the ages of six and seven weeks, respectively. Janet Rose-Hinostroza, an animal training manager at Safari Park, told reporters at the time that the intention was that Ruuxa know Raina from his earliest memories and feel more like she’s a sibling. She noted the cheetah cub “seeks out playing with that dog. … He’s very curious about her, very interested in her.” They even reportedly cuddle together for naps and will hopefully be lifelong pals.

At one time, cheetahs were found throughout Africa and Asia. However, there has been a 90 percent decline in the population over the last century. Cheetahs are listed as a “vulnerable species.” Estimates give the population as less than 10,000 adults in Africa and a meager 50 in Asia, mainly near Iran’s Kavir desert. They are extinct or due to become extinct in 18 countries where they were originally found. There are 680 in zoos worldwide, with about one-third housed in the U.S.