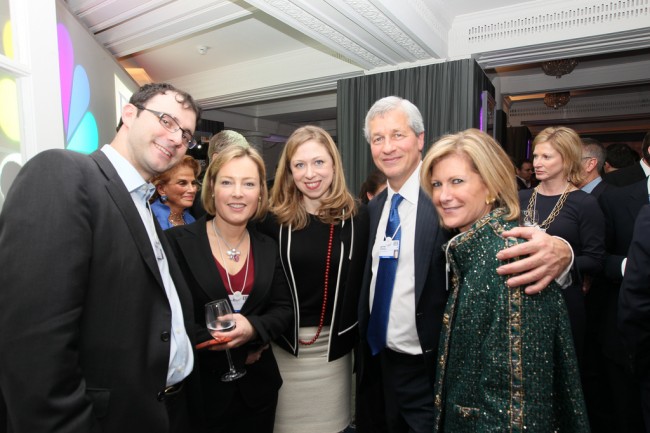 Chelsea Clinton has announced that she has given birth. It is the first grandchild for her parents, who were very excited about the idea of becoming grandparents. The former First Daughter used Twitter to announce the arrival of her baby girl.

Unlike many celebrity parents, she and her husband Marc Mezvinsky, kept the gender of the baby quiet for as long as possible. It was her father, Bill Clinton, who made a potential slipup when he spoke about a potential “grandson” and quickly covered his tracks by saying “or granddaughter.” It left many people believing that the baby was going to be a boy. However, the couple reportedly kept the gender of the baby a secret from themselves, so there would not be a way to accidently slip up.

When she announced her pregnancy in April, she kept many details to herself. This included the due date. All people could do was go by the size of the bump and take a general guess that she was around 12 weeks pregnant when she made the announcement. This is the usual time that people share the news of their pregnancies, as the risk of miscarriage decreases considerably.

The former First Daughter certainly did not let pregnancy or her upcoming due date slow her down. She continued her duties as part of her family’s charity and continued her role at NBC until last month. Clinton announced that she and her husband were looking forward to welcoming their child into the world when she stepped down from NBC, and now she has given birth to a girl.

They decided to keep the name of the baby traditional and almost presidential, with the first name Charlotte. The baby is taking the surname Mezvinsky but will have the middle name Clinton to keep her mother’s family name alive. The former First Daughter is the only child of Bill and Hilary.

Her former president father spoke about the upcoming birth recently. He announced that he wanted his grandchild—and any that come afterwards—to “love being alive.” He will have many opportunities compared to others in society, and he wants to make sure his grandchildren understand that. There will be “certain obligations” that his grandchildren will be expected to follow, and they need to be aware of the billions of other people in the world.

It is the first child for Clinton and her husband, but unlikely to be the last. It seems the two want to have more, but they are looking forward to being first-time parents now. There are many things to learn now, but they will take it all in their strides.

When it came to maternity fashion, the former First Daughter admitted that she had none. She would simply wear anything that fitted, especially when in private. Often that meant wearing her husband’s shirts and t-shirts. She would wear smart dresses when she was out on official business. Now that Clinton has given birth to her first daughter, she will be able to move back to wearing her own clothes on a daily basis.