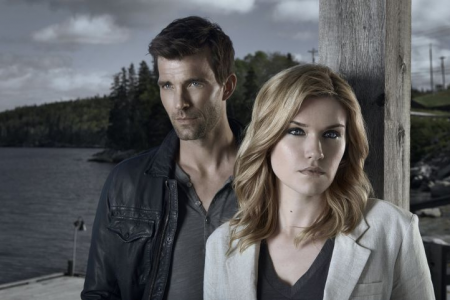 Haven season five has started with the first three episodes being all about Nathan versus Mara versus Audrey. This latest turn of events is confusing if viewers missed season four. The series has run for quite a number of seasons considering the source material, Stephen King’s The Colorado Kid, was a short book of 174 pages. Essentially a mystery, the only real connection that this show has to the book is the town’s two newsmen Dave and Vince. The place that the story took place in was not even called Haven and no character named Audrey existed.

There was a young female, Stephanie a fledgling reporter who was being tutored by the two old men who ran the island paper. The Colorado Kid is an odd sort of a duck for a King book. It does not really fit any of the horror master’s other works, except for another of his splendid shorter books The Girl Who Loved Tom Gordon. There is not a boogeyman in sight and the only real “conclusion” to the story may lie in the world of Roland, or Jack Sawyer’s The Territories, but in essence this is not a horror story nor fantasy or supernatural. All of which Haven has had in bucket loads since Audrey Parker first stepped foot in the island town.

Incredibly this King adaptation for television has remained consistently popular. It may be down to the fact that the show really does not have anything to do with the book that spawned it. The show’s makers have relied instead upon coming up with a storyline that is Stephen King-ish. Lots of weird happenings that have been chronicled by the island town’s two old news hounds that share the same name as the wise codgers in The Colorado Kid. It could be said that Haven, underneath its season five Audrey versus Mara storyline is also still a mystery as well.

Admittedly, the show is interesting, even more so if one had the misfortune to miss all of season four. Three episodes into season five and and it is apparent that a goodly amount of binge watching is in order. Admittedly this is not a bad thing. Since Emily Rose, who gained a legion of fans with her portrayal of Elena Fisher in Naughty Dog’s Uncharted video game franchise, made more than a few fans tune in to the show when it premiered in 2010. On a side note, in season three Emily’s co-star from the Uncharted games Nolan North had a guest starring spot on the show, much to the delight of Uncharted fans.

The storylines have kept up the confusion factor with all the main players since then, but again, only if one had the misfortune to miss season four. Rose has managed to keep Audrey Parker and her various incarnations pretty darned interesting while her co-stars, Eric Balfour (Duke) and Lucas Bryant (Nathan) do a great job of interacting with Rose and each other. While missing season four may have added a huge amount of confusion to the current plotlines of season five, one thing is certain, Emily Rose just keeps getting better in the show.

Haven now has the Audrey versus Mara storyline. Mara, who by all accounts is a pretty nasty piece of work and is, it seems, responsible for all the tiny town’s “troubles.” It must have been fun for Rose to play this baddie since she has been a “good guy” pretty much from day one on the show. Meanwhile, back to the current episode, Nathan looked pretty close to rescuing Audrey from Mara’s evil clutched but both Duke and police chief Dwight Hendrickson have burst onto the scene to mess things up. If viewers want to see how the new storyline of Haven ends, they need to watch SyFy on Thursdays.