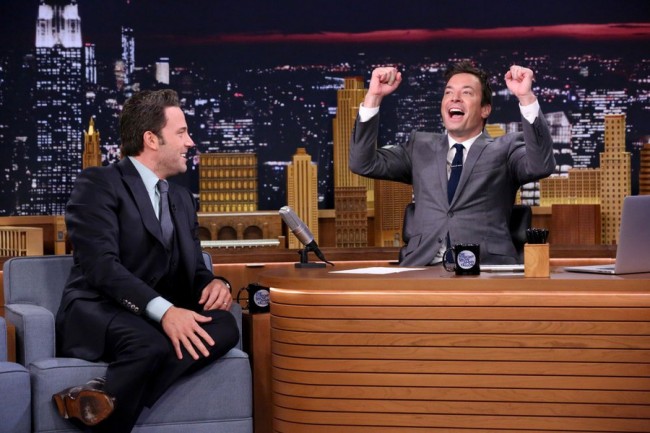 On The Tonight Show Starring Jimmy Fallon tonight, Jimmy welcomes his guests Ben Affleck (Gone Girl), Kate Walsh (Bad Judge) and his musical guest, the living legend, Tony Bennet! Monday marks the beginning of another work week, which is rarely any fun; but, it also is the first weeknight of the Tonight Show, so that helps ease the pain, somewhat, and is always a highlight of any Monday for fans of the show.

Jimmy Fallon began the Tonight Show by welcoming his audience and doing his monologue, in which he joked about celebrities and events in the news. What follows are a few of Fallon’s jokes. “I want to say congratulations to Chelsea Clinton who gave birth to a baby girl. Or, as Hillary likes to says, ‘Third in line to the throne!'”

“A lot of other famous babies have sent messages to Charlotte. Blue Ivy sent the message ‘Charlotte is a weird name.’ My daughter wrote ‘Hey, Charlotte, let’s do a play date soon. I promise I won’t bring my dad, #Nerd.'”

Then, Jimmy Fallon joked about President Obama’s appearance on the TV show, 60 Minutes. He said “This weekend, the world said goodbye to one of the biggest players of all time. That’s right, George Clooney got married.” Probably, the audience expected him to say soemhting aobut Derek Jeter, but he mentioned George Clooney, instead.

“We love it when this guy stops by, he’s in the new film Gone Girl — Ben Affleck is here! Also, Kate Walsh from the comedy Bad Judge is stopping by! This guy’s a legend– he has a new record coming out with Lady Ga — ga, you guys — Tony Bennett is here!”

After that, Jimmy Fallon did a comedy segment called In Reply to. “Here’s one from Kim Kardashian. She said ‘ACDC! She was responding to the question what are the first four letters of the alphabet?”

“Liam Neeson said “A Walk Among the tombstones.” He was replying to what makes for a perfect first date.”

“Here’s one from Walmart. They responded ‘Open a checking account from us.’ The question was “‘How do I know I’ve hit rock bottom?'”

“Here’s the last one, from Queen Elizabeth. ‘They hang all the way down to my belly-button.’ The question was ‘Do you have any diamond necklaces?'”

Jimmy Fallon spoke with Ben Affleck about Gone Girl next. Fallon said he read the book last year, and really enjoyed it. “It’s one of my favorite books,” he told Affleck. “You watch this thing and oh, my God — such twists and turns! Tyler Perry — he’s fantastic in it!”

They talked about Tyler Perry more, his character in the movie and how he likes Luther Vandross. “You have to watch this show, if you want to freak out — it’s so good,” Jimmy Fallon said.

“Yeah, it’s unnerving,” Affleck said. “It’s a cool, interesting movie — I’m really proud of it.” Then, he showed a clip from the movie. It looks like it will be a great and suspenseful flick. 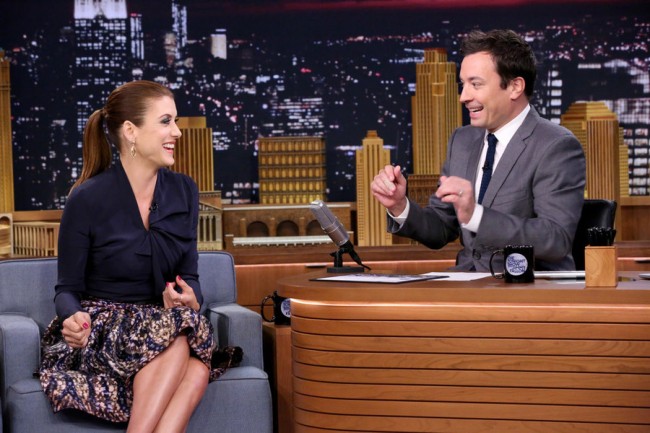 After a commercial break, Jimmy Fallon said “Our next guest is a great actress who stars in the new series, Bad Judge! Ladies and gentlemen, welcome Kate Walsh!”

“I did it with my boyfriend,” Walsh related to Jimmy Fallon. “If you don’t paddle in sync, it’s really dangerous. I asked what the white-water rafting Category 5 was like, and they said ‘Like Niagara Falls.’ I got jettisoned from the raft once, and my brother kept saying ‘Get back in the boat!’ It’s a crazy adventure. Our leader, about midway through the day, got his shoulder dislocated.”

“His shoulder popped out?” Fallon asked.

“Yes, his shoulder popped out. He wanted us to put it back in.”

“He was screaming in pain?”

“Yes, he was screaming in pain,” Kate answered.

“I want to thank your mom. Here’s what your mom put in her front yard,” Jimmy Fallon said. He showed a photo of a sing that read: Bad Judge.

“You produced this, as well as Adam McKay and Will Ferrell,” Fallon said.

Kate and Jimmy talked about Bad Judge and then Fallon showed a clip from the premiere, this coming Thursday. The clip showed a court scene and a humorous sidebar the judge has with one of the lawyers. 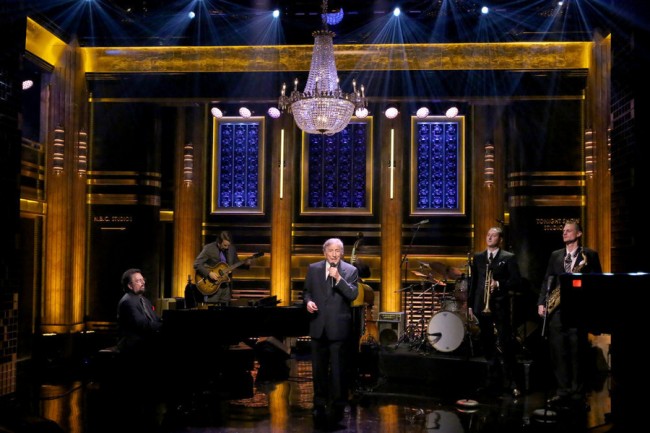 Then, Jimmy Fallon said Tony Bennett would be on next and showed a clip from Lady Gaga, who could not be there, but who introduced Bennett. She either had brunette hair or was wearing a wig. Tony Bennett sang a couple of standards, including It Don’t Mean a Thing If It Ain’t Got That Swing with lyrics by Annie Ross, according to Lyrics.net. Lady Gaga sings that song with Bennett on his latest album.

The Tonight Show Starring Jimmy Fallon can always be counted upon to brighten one’s day, and tonight’s episode helped ease the pain of another week of work (or school) ahead of most people. Jimmy’s guests, Ben Affleck, Kate Walsh, and Tony Bennett were terrific and the guests the rest of the week sounded great, as well. Be sure to tune in and watch The Tonight Show Starring Jimmy Fallon tomorrow night!