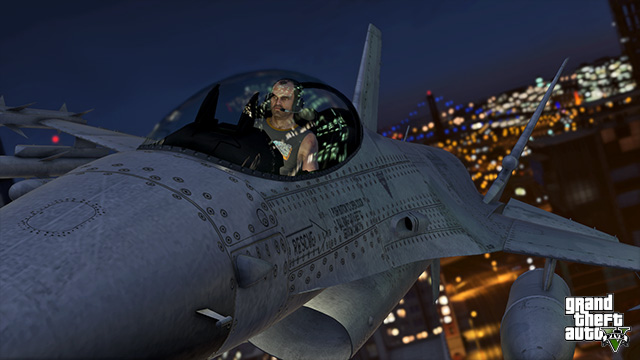 It is true, Grand Theft Auto 5 will be coming to the Xbox One and PlayStation 4 before the end of 2014. Today Rockstar Games announced that GTA V would arrive November 18 on next-gen consoles and January 27 on the PC. These versions of GTA V will feature a larger player count for Grand Theft Auto Online, which has been increased to 30 players.

These newer versions of Grand Theft Auto 5 will include the type of upgrades expected from more powerful consoles, such as better graphics, technical upgrades, more weather effects and all around improvements to make the environment look even more impressive. Denser traffic, new foilage, and additional wildlife are a few of the details that bring the scene to life. See for yourself.

Grand Theft Auto 5 has a lot to offer and a lot of small details that all sorts of people appreciate. Love the radio stations? Expect more than 100 new songs in addition to new DJ mixes. Love the travel? Get yourself a blimp.  Love the weapons? More will be available of course!

Individuals with characters on the Xbox 360 or PlayStation 3 will be able to transfer up to next-gen consoles. Those that pre-order will be rewarded with $1,000,000 in-game money, which will be split two ways between the online portion of the game and the offline portion. Also, all existing gameplay upgrades that have been added to GTA V will be available in the next-gen versions of the game.

Rockstar is rewarding past players further by giving bonus content to those that already own copies of GTA V. Activities include wildlife photography and new shooting range challenges, which is to say that there are also new weapons. Can’t forget the vehicles though, classics from the GTA series like the Dukes, the Dodo Seaplane and the Blimp will all be making an appearance. To get such bonuses players need to have at least finished the Grand Theft Auto 5 prologue while connected to the internet on either Xbox 360 or PlayStation 3. A Rockstar Games Social Club account is also required.

This is all good news however, where are the previously promised hesists? Unfortunately, still no word from Rockstar Games on when those can be expected. Rockstar has been keeping good on their word to update the game with the inclusion of free content, which is always appreciated. Updated versions of GTA V sound like good news, but have people already spent all the money the intend to on this installment of the series? After all, each downloadable content update that goes live does so for free, will people rebuy this title or simply stick with the one they have? Also what about  Destiny? The game so big it could hinder other game sales (for a while). However, November is far enough from September that some will likely already be done with Destiny and ready for their previously promised next-gen Grand Theft Auto experience.