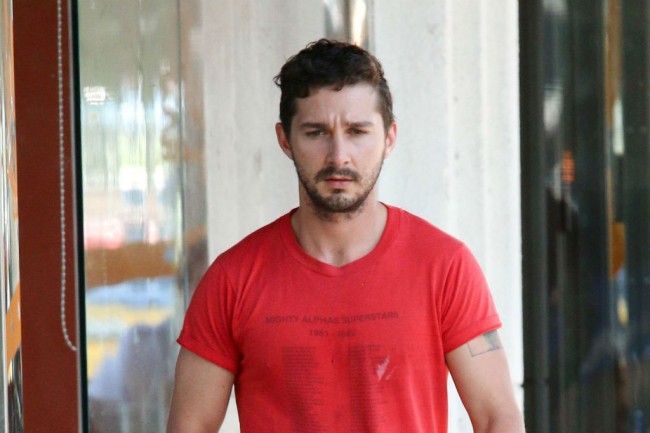 Shia LaBeouf found himself in court on Wednesday in regards to an incident this summer at a Broadway performance of Cabaret resulting in an arrest. Since the actor’s arrest this summer, he has been seeking treatment for alcoholism. LaBeouf was in court Wednesday to plead guilty to disorderly conduct.

The 28-year-old actor was arrested this summer after he went to a performance of Cabaret and during the performance he stood up and started shouting obscenities at the actors. Not only was he yelling at the cast of the show but he was also screaming profanity at the guards and slapping random members of the audience on the back. When LaBeouf was asked to leave Studio 54 by security and management, he refused. The charges brought against the actor were for his refusing to leave the theater upon being asked, for creating a disturbance, shouting obscenities outside of Studio 54 and also for spitting at a police officer while he was at the police precinct.

Since July, the actor has been receiving treatment voluntarily for his addiction to alcohol. The actor’s representative, Melissa Kates, says that LaBeouf understands that his actions as of late have been a result of his current health problems. By voluntarily taking part in a treatment program for his alcohol addiction he is making the needed first steps towards getting better.

The Cabaret incident was just the latest in a series of odd behavior from the actor. In December of 2013 the actor was caught plagiarizing a graphic novel by Daniel Clowes, which he followed up by copying a response found on Yahoo as his apology. Then, in February of 2014, walking the red carpet at a Film Festival, he wore a brown paper bag over his head that told the world he was no longer famous. The latest stunt has left LaBeouf having to plead guilty in court for disorderly conduct.

The judge in his case has mandated that on top of his voluntary treatment for his alcohol addiction, he must also undergo mandatory treatment at a facility called The Hills. The court determined that if the actor completes three more months of treatment with no more arrests, at that point his charges will be dismissed. Basically, the court is delaying sentencing for a total of six months to give the actor a chance to make amends and clean himself up. Labeouf’s next court hearing to determine if the actor was able to complete treatment and stay out of trouble will be held in November.

Since the first incidents back in December, many have been questioning the actor and his behavior. With the actor continually calling his behavior a form of performance art, many were skeptical about this response and concerned over the increasingly bizarre behavior. Instead, Labeouf has to deal with actions that have left him pleading guilty in court on charges of disorderly conduct and forced to not only continue his voluntary treatment but also court ordered mandatory treatment. If LaBeouf is able to stay out of trouble and make it through his treatment, then his guilty plea can be withdrawn and his case dismissed.