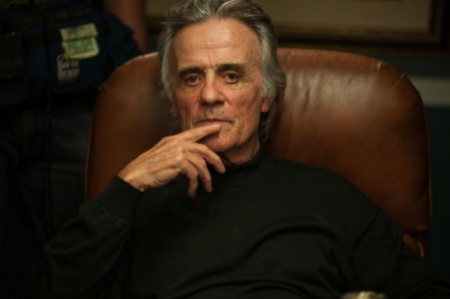 Most people recognise Terry Kiser from his 1989 portrayal of Bernie Lomax the dead boss in the comedy Weekend at Bernies but now the actor is working on season two of the webseries Johnny Dynamo and he agreed to have a chat with the Guardian Liberty Voice about his recent work and much, much more. On September 5, 2014 the 75 year-old performer took time out of his busy schedule, he was in the middle of costume fittings for another production, to speak with the paper.

Years ago Terry attended the famed Actors Studio where Lee Strasberg mentored the young actor, but before working with the famous acting instructor, Kiser had already performed in 50 stage plays. Afterward he did some commercials and other television work before he made his film debut in the 1968 film Rachel Rachel.

As a “jobbing actor” Kiser has 138 credits under his belt as an actor and he runs The Actors Arena acting school in Austin, Texas which has just celebrated its first year anniversary. This versatile and prolific actor has worked with some of the most iconic names in show business, Carol Burnett and Gene Hackman to name but two and Terry says he learned much about the craft from both. The actor also says that each of the performers, despite being from different ends of the professional spectrum, approached acting the same way.

This hard working, and very busy, actor granted an exclusive interview with the Guardian Liberty voice where he spoke about his delight at working with Johnny Dynamo writer/director Joe Thomas and the other actors on season two of the web series, he also explained that the Internet was more like working on television, or a film, than people would think.

Kiser explained that as an actor, he still had to find and portray a character, remember his lines and “hit his mark.” Terry also said that the production values were brilliant. Anyone who has seen season one of this dramedy would agree. The actor’s involvement with the show’s first season cast was a great experience and the inclusion of Tommy “Tiny” Lister to the show made Terry’s day.

Lister, who is 6 feet 5 inches tall and around 300 pounds, told Kiser at the end of their first scene in the show that he had “learned from the master.” The two men’s first bit together consisted of the massive actor threatening Terry’s character – mafia boss Mickey Petrucelli – who calmly ate an orange during the exchange.

Terry explained just what drew him to the web series, the show is a combination of serious and funny, and the fact that Joe Thomas tailored the role of mob boss Mickey around the actor’s mispronouncing a word in rehearsal. The gag then became a part of the character and Terry said that he loved it.

On top of information about the Internet webisode, Kiser also talked about how to act convincingly, “stop intellectualizing and just do it.” This was on top of the idea that the actor needs to be in the moment, and that if they do their homework properly, they will be able to do just that.

Terry Kiser, has a long career behind him and plenty of work still ahead of him. In 10 days time, his work on season two of Johnny Dynamo will air and more than that, this award winning actor will be working on still more projects. The actor can be heard on the video below where he talks about the web series, Weekend at Bernies, acting and many other subjects.