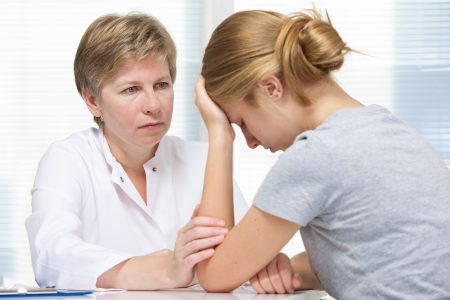 A new research report proposes that women who are suffering from post-traumatic stress disorder (PTSD) have been found to possibly be more likely to develop addictions to food. The study was conducted by examiners at the University of Minnesota and showed that females might use food as a way to deal with psychosomatic stress.

PTSD is a disorder that affects individuals who have observed some sort of disturbing event such as a death. It is believed that nearly four percent of the American adult population have been diagnosed with the ailment. PTSD is also believed to raise depression risks. Binge eating, anorexia and bulimia are some of the top kinds of eating disorders. However food addiction is not thought to be a psychiatric illness.

Information for the research report was gathered from Nurses’ Health Study II. The study listed food addiction as being defined by two or three symptoms such as feeling guilty about eating so much, eating when did the person did not feel any hunger and attempting to cut down on amount of food eaten.

Women who have been found to suffer from post-traumatic stress disorder seem to be more likely to develop food addictions. Over 80 percent of the 49,410 women in the study described that they had been through at least one painful event. In the group, about 35 percent did not have any PTSD symptoms, while around 40 percent experienced one to three symptoms and 10 percent reported having six to seven symptoms. PTSD is rated on seven different symptoms.

The investigators of the study stated in a news release that to their knowledge, the study they performed was the first that examined the link between PTSD symptoms and addiction to food. They explained that their conclusions were pertinent to continuing questions that regard actions behind perceived associations between PTSD and obesity. The findings also give support for theories that show the suggestion between PTSD and obesity might somewhat originate in poor coping skills and use of food to deal with trauma related distress.

The researchers explained that females who reported having PTSD symptoms at a young age were more likely to develop food addictions than other women. Physical and sexual abuse experienced during childhood and the subsequent mental trauma were also deeply related to eating disorders.

Dr. Susan Mason, who works at the University of Minnesota and is the chief author of the research study, spoke to the media about her report. She explained that she wanted it to be added to other information already available that shows a person’s weight status is not related to willpower or the amount of education. There are usually psychological factors involved as well.

However, the researchers explained that they still do not know which came first, PTSD symptoms or food addiction. The investigators also warned against trying to create a cause and effect relationship just yet. More research is needed before a link can be definitely established. Even though their research report was printed up in the most recent edition of the journal JAMA Psychiatry, they will continue to examine women who are experiencing PTSD and see if they experience addictions to food.