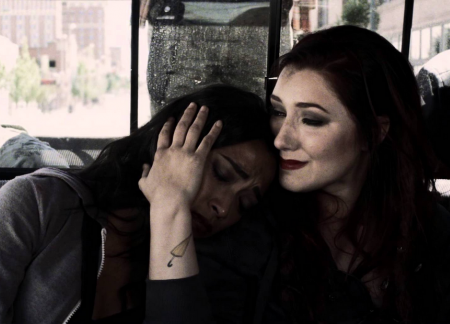 It is hard to denigrate the kind of creativity that comes up with a zombie stampede and gives a huge wink to Zombieland by showing a load of twinkies being eaten by the good guys in the latest episode of Z Nation on SyFy. Not to mention the other nod to The Walking Dead, the comic verse not the television show as they have not covered that issue yet, by having an episode that features a creepy cannibalistic “family.” It should be mentioned that in all fairness, the cannibal angle was covered the The Walking Dead video game.

There were a ton of references to other TV shows, even the old soap opera All My Children got a mention by the survivor leader who went mad and started feeding his captive brood other living people. This week’s episode managed to work in a gag with the Liberty Bell, which in turn gave the opportunity to poke fun at graffiti artists. The show even took a leaf from the Bugs Bunny book of escape when Cassandra took off like the rascally rabbit himself once the cannibal group crossed her path while Doc and 10k were dismantling the satellite dish.

Just like the old Warner Bros Looney Tune classics, when Cassandra comes across a group of zombies feeding in the alley, it is not her they go after but her old captors. It almost had a “shoot them now or shoot them later” feel to it. The woman is so good at the bolt and run technique that she does it later when being threatened/questioned by the good guys.

As the show continues it is hard to believe that there are viewers out there that take it seriously. The zombie apocalypse in Z Nation is funny on so many different levels, not including the stampede and the show’s protagonists feasting on twinkies. On the outset the show makes no sense on just as many levels. The denizens of the apocalyptic world have endured the presence of zombies for three years, yet their clothes border on being pristine. Unlike their vehicles which could be mistaken for a transport used by the Reavers in Serenity.

Citizen Z as the saviour of this little group who need to get the “package” to California in order to save what is left of the human race is another great gag. The fact that the “package” is an infinitely unlikable former prisoner who was volunteered to save the world by having the injection that allowed him to survive multiple zombie bites is ironic and amusing.

When Addy is captured by the family, giving her boyfriend Mack his chance to have a Stanley Kowalski moment “Addy!” she is more terrified than upset. When Travis has two sisters treat Addy to a make over, her fear turns to anger at the clothes they put her in. “I look like a post-apocalyptic stripper.” Understandably she opts to return and kick the family’s collective and badly dressed derriere for committing the fashion gaff. Addy looked pretty kick-ass in her personal pre-stripper outfit and after being dressed in the new threads her cool factor dropped alarmingly.

The end of the program looked very western right down to the cattle stampede (read zombie stampeded) used to overwhelm the superior force being attacked by Addy’s chums to rescue Cassandra. When Z Nation ends Addy is back, presumably starving since the last time she ate was at the twinkie feast early in the episode, and the newest female member of the group is now a permanent member. Now the survivors can concentrate on getting the package to Ca. Z Nation airs on SyFy Fridays.