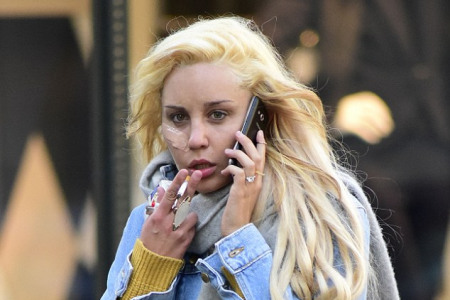 Amanda Bynes has taken a New York trip after being arrested for suspicion of driving under the influence (DUI) in Los Angeles on September 28. The former Nickelodeon star has fallen on hard times after doing so well after being diagnosed with mental issues and being put under the conservatorship of her parents.

The troubled actress was spotting in New York city sporting a large bandage on her right cheek, just under her eye. Bynes walked down the street smoking a cigarette as she pressed her cell phone up to her ear and looked disturbed.

The Easy A actress had been seen with the bandage on her face earlier while she was in Los Angeles International Airport. She was spotted sitting at an eatery and talking to her self while applying “lots of makeup” according to a witness.

According to staff at Gladstones, while the 28 year-old actress sat at the table, she consulted a compact mirror, applied makeup and talked to herself. She also ordered shrimp and asked for a Shirley Temple, a non alcoholic drink.

The same staff felt that it was obvious Bynes was on some sort of “stimulant.” When the Hairspray actress was seen in New York, she was still apparently talking to herself and under the influence of something.

Amanda’s clothes were mismatched but she still had a diamond ring on her finger on her New York trip. Bynes seems to be on her own since the performer’s parents had no idea where their daughter was when questioned earlier.

Last year the troubled former child star was plagued with legal problems that included being arrested for suspected pot possession as well as for throwing a bong out of her kitchen window.

The young woman also traveled from one coast to the other, getting in trouble on both sides of the country. Bynes was finally arrested in Los Angeles July last year after setting a stranger’s driveway on fire in Thousand Oaks, California.

After the driveway incident Bynes was stopped by the police after she went into a convenience store to wash gasoline off of her dog in the employee’s washroom. When questioned by law enforcement officials Amanda made no sense and rambled.

The entertainer was then placed on a 5150 psychiatric hold pending tests on her mental state. The She’s the Man star behaved oddly throughout 2013, attacking other celebrities on Twitter as well as non celebs who annoyed the performer.

While under observation, Bynes was allegedly diagnosed with bipolar disorder and a mild form of schizophrenia which her mother later denied. Amanda’s mother also took the actress off of her medication in April this year. Now just five months later, history is repeating itself in terms of the actress’s bizarre behaviour.

TMZ have reported that after Amanda Bynes was arrested by police in California, where she posted $15,000 bond, she colored her hair and went to New York for a short trip. Hopefully this latest episode will not signal the beginning of a repeat of her year in 2013. At least she has not been Twitter ranting just yet, which is surely a good sign.