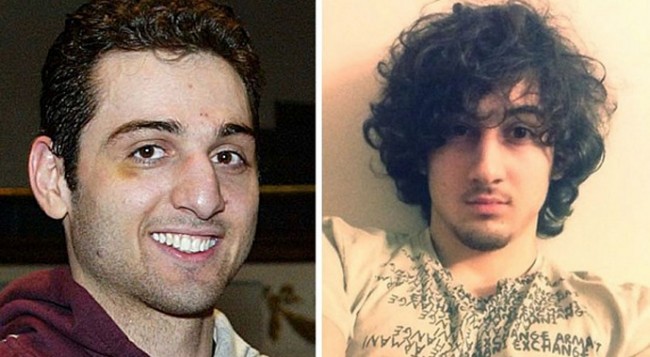 Boston Marathon bombing suspect and accused terrorist, Dzhokhar Tsarnaev, revealed details of his older brother’s involvement in a 2011 triple slaying. Tamerlan Tsarnaev, who was Dzhokhar’s brother and bombing accomplice, was involved in the murder of three Massachusetts men back in 2011, according to court documents. The older Tsarnaev brother was subsequently killed during a showdown with police on Apr. 18, 2013 after the Boston Marathon bombing that killed three and injured 260 other people, which occurred on Apr. 15, 2013.

According to court papers filed Friday by Tsarnaev’s defense team in U.S. District Court, “the government disclosed that an identified witness would be prepared to testify” to Dzhokhar’s knowledge of his brother’s involvement in the brutal 2011 slayings.

Accused Boston Marathon bombing suspect and terrorist Tsarnaev’s defense team has made clear its intention to argue that Tamerlan was the dominant perpetrator of the crimes their client is accused of committing. Moreover, defense lawyers have filed a motion in order to gain access to documents related to the 2011 case. Such evidence, they argue, could be vital in demonstrating the relative culpability of the two brothers. Furthermore, sources contend that a friend of Tamerlan reportedly implicated him in the triple slayings shortly before his death.

In the motion, Dzhokhar’s defense team argued that information and evidence that indicated Tamerlan Tsarnaev’s involvement in the triple murder in 2011, as well as information depicting the savage nature of those slayings, is critical to the defense of their accused client. If the revealed details are proven credible, the evidence could not only be beneficial to Tsarnaev’s Boston Marathon bombing case, but could also offer closure to the unsolved triple homicide case that went cold soon after it happened. The slayings occurred on Sept. 12, 2011 in the Boston suburb of Waltham, Mass., where three local men–Brandon Mess, 25, Erik Weissman, 31, and Raphael Teken, 37–were found with their throats slit and marijuana spread over the bodies. At the time, the murders were believed to be drug-related.

The unsolved murders have become a crucial twist in the Boston Marathon bombing case amid evidence that Tamerlan Tsarnaev was involved. Moreover, this is the first indication that his younger brother might have been aware of his alleged involvement in the slayings. Furthermore, there has been much speculation regarding the murders and the suggestion if they had been solved, the Boston Marathon bombing may have been prevented.

In May 2013, Ibragim Todashev, a boxer who had trained with and was also friends with Tamerlan Tsarnaev, was shot and killed by a FBI agent who was interviewing him about the Boston bombing case. According to court filings, Todashev had implicated himself and Tamerlan Tsarnaev in the murders before he was killed.

The motion filed on Friday was also part of a larger push by the accused Boston Marathon bombing suspect’s defense team to gain access to discovery evidence compiled by the federal government in its case against Tsarnaev for the April 2013 bombing that killed three and injured more than 250 near the marathon’s finish line.

The developments in the case of Boston Marathon bombing suspect and accused terrorist, Dzhokhar Tsarnaev, came just days before both sides are scheduled to release their initial list of witnesses in the bombing trial, which is scheduled to begin in January 2015. Both sides are due in a Boston courtroom on October 20 for a status hearing on the case. Prosecutors have asked that Tsarnaev, who revealed details about his older brother’s involvement in three 2011 slayings and has not been seen in court since July 2013, when he was formally charged in the Boston bombing attacks, make an appearance in court at that time. However, it remains unclear if he will do so. Tsarnaev has pleaded not guilty in the Boston Marathon bombing attacks. If convicted of the crimes for which he is accused, Tsarnaev will face the death penalty.