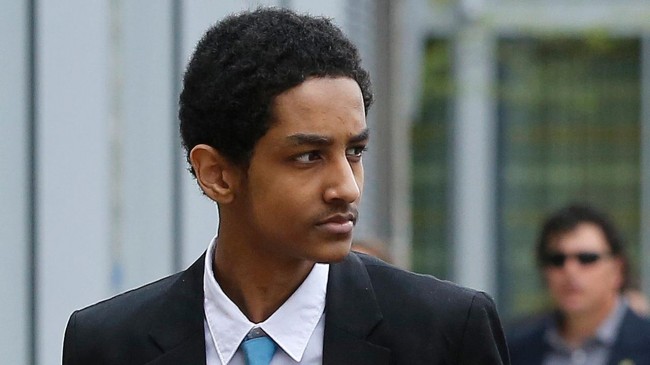 A friend of Boston Marathon bombing suspect Dzhokhar Tsarnaev was found guilty on Tuesday by a federal jury. Robel Phillipos was convicted of telling lies to federal agents investigating the explosions. The 12-member jury deliberated for 35 hours over a total of six days before announcing their decision to convict Phillipos, 21, on two counts of making false statements for a total of five different lies he told agents regarding the bombing. He and Tsarnaev had been friends since high school, and both attended the University of Massachusetts Dartmouth.

The panel concluded that Phillipos had lied about what he saw three days after the bombing, during the night of April 18, 2013. On that night, he and two friends of Tsarnaev recognized the image of the bomber released by the FBI as their friend and went to the dorm room of Tsarnaev, where they removed a backpack. The backpack held items which were later thrown into a dumpster, including empty fireworks tubes and a computer, which could have incriminated Tsarnaev in the Boston Marathon bombing.

When asked by agents if he had seen the backpack being taken from the room and thrown away, Phillipos lied on two separate occasions. Prosecutors argued that the lies harmed the investigation into the Boston Marathon bombing. In order to find him guilty for lying on both days, the jury only had to find that he lied just once on only one of the days. Among the statements that the jury determined were lies were his comment to the FBI in which he said that he had no recollection of going to the dorm room on Apr. 18. He then admitted that the three of them had gone to the dorm room, but had left without entering because the door was locked. He  then admitted to being inside of Tsarnaev’s dorm room on Apr. 18, but in the afternoon and only for approximately 10 minutes while he spoke to Tsarnaev, which jurors determined was a lie. Finally, he was convicted of lying when he said that none of the three took the backpack from the room nor was he aware that the other two had taken anything.

The jury did not convict him for statements he made during the Boston Marathon bombing invesigation which indicated that he did not see anyone remove the backpack from the dorm room on that day. They also found him not guilty of lying when he said that he never saw a backpack or fireworks in the dorm room. Lastly, he was acquitted on charges that he lied when he denied speaking with the other two friends about throwing the backpack away.-

The guilty verdict came despite arguments by the defense that Phillipos had smoked so much marijuana on Apr. 18 that he was unable to accurately remember the events of the night. Therefore, he did not lie to the Boston Marathon bombing investigators, but simply was not able to relate what really happened with any clarity.

Sentencing has been set for Jan. 29 by U.S. District Court Judge Douglas P. Woodlock, who ordered Phillipos to remain under  the house arrest he was ordered to serve after posting bail. Both counts of which he was convicted could carry a sentence of eight years. The maximum sentence faced by Phillipos was lengthened from a maximum of five years per count because the jury ruled that he had lied during an investigation into terrorism. Defense attorney Susan Church believes there is a good basis for an appeal of the verdict based on Phillipos’ clean criminal record and the “shock and dismay” that he must have felt to discover that his high school friend was responsible for the Boston Marathon bombing.

Phillipos’ trial lasted approximately seven days. He was supported in the courtroom by family friends and relatives as well as friends from high school. Michael Dukakis, former governor and family friend, also spoke in support of Phillipos, saying that when he spoke with the young man while he was in the middle of being questioned by agents regarding the Boston Marathon bombing, Dukakis thought he seemed to be “confused.”

The other friends of Phillipos and Tsarnaev, Asamat Tashayakov and Dias Kadyrbayev, were both found guilty of charges of obstructing justice. They are in the Essex County jail, where they have remained since being arrested approximately one-and-a-half years ago, and are currently awaiting their sentencing.

The trial for Tsarnaev, accused of the Boston Marathon bombing, is slated for a January start. He is charged with making two bombs out of pressure cookers and denotating them at the finish line of the marathon. The explosions killed three people and injured over 260 others. Tsarnaev’s older brother, Tamerlan, assisted in the bombings but was killed by police  in a shootout while attempting to escape. The brothers are also alleged to have killed an MIT police officer during their attempt to flee. Tsarnaev was arrested after a massive three-day manhunt.