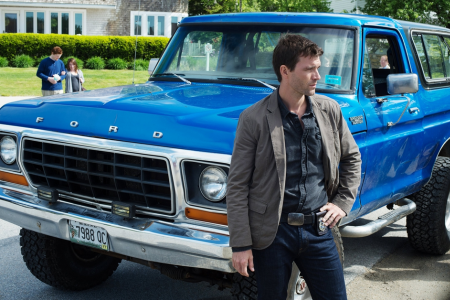 Just when it seemed that things could not get any stranger in Haven, episode seven – titled Nowhere Man – steps up to the challenge and focusses on ground zero type disappearances and Nathan going poof with only Mara being able to see and talk to him. It really seems that Wuornos and Parker cannot get a break in this season. Audrey has only just been separated from her “twin sis,” and already Nathan has noticed that he can no longer feel the object of his affection.

Considering that this was one of the reasons that he and Audrey got together, this recent turn of events is fairly catastrophic for the couple. Before the lovers make this disturbing discovery, folks who have been to the Haven Farmers Market are vanishing, but not “without a trace.” In each instance, the person’s shadow is left behind on some surface. As Nathan himself points out, it looks like a ground zero blast at a nuclear explosion.

When Wuornos disappears, leaving his shadow on the floor of the local Haven police station, he can see and hear everything going on around him, but cannot interact with anyone or anything. He has no corporeal presence and later he literally bumps into another resident of the town who tells him that they are ghosts. While Nathan tries to figure out what happened to him and some way to communicate with Audrey, there are some Haven citizens who think that Parker is Mara and want to force her to help them get rid of their troubles.

Nathan goes to the cemetery, on the advice of the “ghost” he met in Haven and bumps into two more “residual images” – one of whom is Christopher Masterson, aka Francis from the old Malcolm in the Middle comedy series – and in episode seven, the mysteries continue. In this case, the question of why the folks who disappear leave a ground zero shadow behind and why can Mara see and hear Wuornos.

Annoyingly for the lover of Audrey, Mara does not want to help him communicate with anyone, let alone Parker. The evil twin version of Audrey insists that there is still some connection between her and Parker. Finally, after it looks like Audrey may die, she gives in and promises to help.

It does seem a real shame that Nathan has been literally taken out of the picture after he worked so hard to save Audrey. He alone believed that Parker was inside Mara and he stuck by his guns until others believed it too. Of course now that he knows that Mara can see him, Nathan has realised that he is alive and not a ghost.

Again, just as he starts to see a light at the end of this particular tunnel, he returns to the cemetery to find the first “ghost” he met in Haven is now dead. A note scrawled in blood on one of the tombstones says even the “dead can die.” This after Nathan convinced the victim to fight and return to life. By the time episode seven of Haven ends, the ground zero question is still unanswered and Mara still has some advantage over Duke and Wuornos because they need her. Audrey and Nathan are still apart but together and it seems that they may have to wait a bit longer, again, to be a real couple.