If it seems like there is just about any product with Hello Kitty on it, a visit to the Japanese American National Museum (JANM) will confirm it. The museum and manufacturer Sanrio present Hello! Exploring the Supercute World of Hello Kitty, the first large-scale retrospective in the U.S., which shows the amazing cultural impact the character has had. 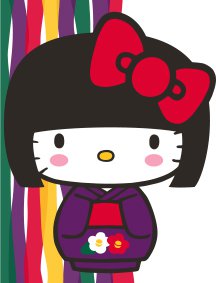 The Los Angeles exhibit is part of the icon’s 40th-anniversary celebration. The JANM presentation includes an extensive array of rare and common items from the Sanrio archives, alongside innovative contemporary artworks featuring Kitty in a variety of media.

Sanrio was founded in 1960 as the Yamanashi Silk Center Co., Ltd., by Shintaro Tsuji, who is referred to at the exhibit as the papa of everything Hello Kitty. The company’s direction began changed after they introduced a rubber beach sandal decorated with a flower. Tsuji realized that decorative elements like a strawberry or flower could transform merchandise into a branded product, a marketing element that was uncommon 40 years ago. The firm was then rebranded as Sanrio, means pure river.The Hello Kitty character first appeared with a goldfish friend on a small vinyl coin purse in 1975. While many replicas of the purse have been developed, including a recent Sephora make-up bag, that pay homage to the original, only one of the original purses reportedly exists stored in a vault at Sanrio’s Japanese headquarters.

Between that introductory purse and Sephora bag, Hello Kitty has been on just about any type of merchandise from girlie things like brushes, knick knacks, accessories to appliances like a toaster, waffle maker, sewing machine and more. There are also numerous backpacks, purses, lunch boxes and other typical items.

The character’s visage has also appeared on some unexpected merchandise. This included motor oil, light bulbs, toilet paper, a surfboard, braces for teeth, batteries and feminine napkins. The exhibit also shows some merchandise that is considered to be controversial. For example, there are the personal massagers (also referred to by some as the Hello Kitty vibrators) and tarot cards.

Initially, the Kitty character was not tied to traditional Japanese items because she was created as a tim 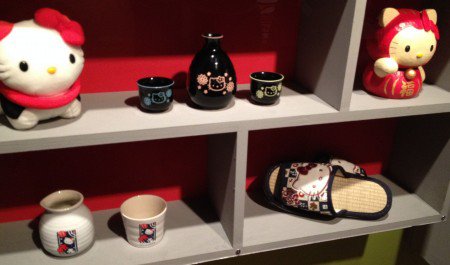 e when Japanese girls were fascinated with the West (and as a character lives in London). Now, though, Sanrio does have Hello Kitty items that market Japanese culture and products. There are kimonos, chopstick holders, rice bowls, lucky cat banks, sake sets, seaweed chips and ramen.

Even though, Kitty is still the same age and size (5 apples high) as 40 years ago, there have been design changes along the way. Yuko Yamaguchi, the “Kitty Mama,” has been head designer since 1980 and has guided the evolution of Hello Kitty. One obvious change from four decades ago involves her bow, which has gotten larger over time and is now even used as an icon on some items.

Coloring has also changed. Kitty was initially simply drawn in primary colors with a black outline. Now, there is the ubiquitous pink Hello Kitty items, other color schemes and many renderings without the black lines.

Sanrio insisted earlier this year that their marketing star is not a cat, however, the whiskers and pointed ears have always been present. Never present is a mouth. This lack of expression allows fans to imagine her personality and reaction. Some believe the minimalist design has helped her longevity by providing greater flexibility for designers and fans.

While it remains to be seen if Hello Kitty and friends will still be a marketing phenomenon for another 10 years, the museum clearly shows the amazing cultural impact of the Hello Kitty character. She is clearly still very popular, as exemplified by the groups of girls and families swarming to the exhibit. Because of demand, admissions to this JANM presentation are based on timed entry, so advance ticket purchases are recommended, especially for the holidays. The Hello! Exploring the Supercute World of Hello Kitty will be at the Los Angeles museum until April 26, 2015.