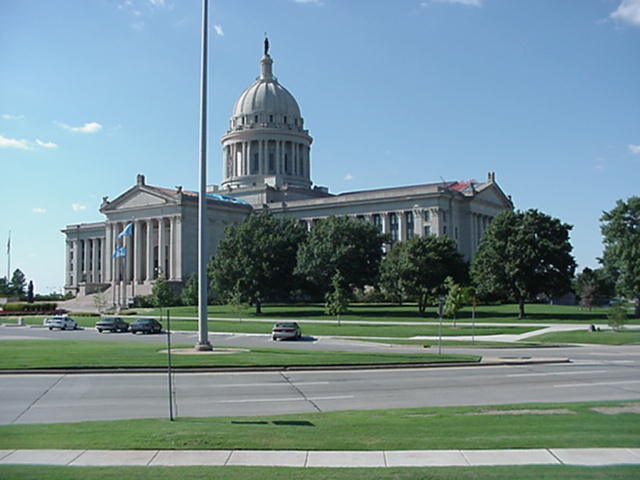 A Oklahoma State Capitol Ten Commandments monument was destroyed on Thursday evening when an individual drove across the building’s lawn and collided with the statue. The suspect allegedly told law enforcement that the Devil made him do it. The automobile the suspect was in hit the statue and then proceeded to run over it, busting it into numerous different pieces. After the man collided his vehicle, he supposedly ran into the federal building and reportedly starting making threats toward President Obama, stated David Allison, who is an associate special agent in control of the Oklahoma City division of the United States Secret Service.

When the threatening statements were made, that was when the Secret Service itself was alerted, explained Allison. While the suspect was being questioned, he allegedly admitted to hitting the monument. The man, whose identity has not yet been released to the public, reportedly informed the Secret Service that Satan ordered him to tear down the statue.

The suspect next explained that he had been diagnosed as being bipolar and that he was not taking his medication at the present time. He was next handed over to the Oklahoma Highway Patrol where they took him to a Oklahoma mental health facility. He was placed there under an emergency detention order, explained Captain George Brown, who spoke for the Oklahoma Highway Patrol. The suspect was scheduled to go through a mental assessment.

Law enforcement are planning on meeting with the Oklahoma District Attorney’s Office on Monday in order to deliberate what the charges might be. The fragments of the monument were put on a truck on Friday by way of a forklift and moved to a storage building.

The Governor of Oklahoma, Mary Fallin, released a statement that said the monument would definitely be reconstructed. She stated the statue was erected to honor the historical meaning of the Ten Commandments in leading people’s lives and also the law. She added that it was completely atrocious that a person would destroy something at the Oklahoma State Capitol, much less a monument that had so much meaning.

However, the statue has been the center of controversy. Because of the rule of separation of church and state. The American Civil Liberties Union (ACLU) of Oklahoma have been fighting for several groups in the state that have wanted the monument taken down. It was in September when a Oklahoma judge stated the monument would be allowed to stay on government grounds.

The nearly 6 foot granite tribute was put up in 2012 after Republican state Representative Mike Ritze and his family raised the funds for it. The ACLU has been working to have it taken down since then. The various other groups that have also been fighting against the monument had petitioned to have their own statutes put up on the Capitol lawn. One wanted to build a statue of Satan which would have been almost 7 foot. Another request was from the sardonic Flying Spaghetti Monster church.

Even though the ACLU is against the Ten Commandments monument, they stated they were extremely upset and angry that the statue had been destroyed. A spokesperson explained that seeing the monument knocked down and violated was very offensive to anyone of faith.