Rehana, Female Fighter in Kobani With 100 Kills, May Have Been Beheaded 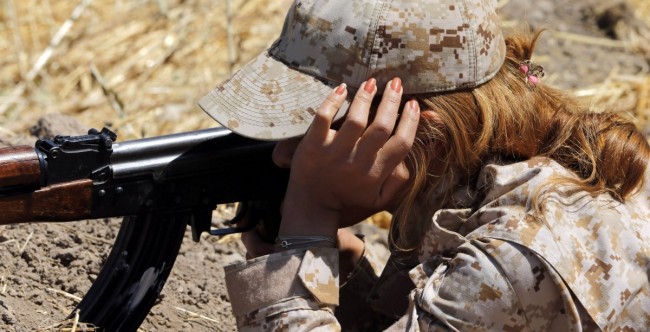 A Kurdish female who became something of an internet star for reportedly racking up 100 kills, during the ongoing siege of Kobani, has reportedly been captured and beheaded by the Islamic State, according to several unconfirmed reports. Others, including the journalist who first introduced her to the outside world, have cast doubt on the claims, saying that there is no evidence she has been killed.

Rehana, as she is known, is said to be a member of the Kurdish Women’s Defense Unit, or YPJ. It is estimated that thousands of Kurdish women may have joined the battle for the town in northern Syria, which has been the target of a ferocious siege by ISIS forces. Rehana, although just one female fighter among many, became a symbol of Kurdish resistance after journalist Pawan Durani from Kashmir, India, tweeted a picture of her along with the claim that she had killed 100 ISIS terrorists during the struggle for Kobani. Little else is known about the young woman and many Kurds who have taken up arms do not reveal their true identities – partly to protect their families and also because Kurdish fighters are considered terrorists by the Turkish government.

A recent rumor surfaced that a number of female Kurdish fighters had been captured and executed by the Islamic State and it was speculated that Rehana may have been among them. Now, an image has apparently been posted to Twitter which shows an ISIS terrorist holding her severed head. Other reports say that an image of her decapitated body has surfaced. Claims of her death, however, have not been substantiated and Durani himself has taken to Twitter to deny the rumors.

Kurdish women have formed all-female units and also serve in mixed units alongside men. Another female fighter, who goes by the name Afshin Kobani, is the commander of one such unit. Kobani is her home town and she has been fighting the advance of ISIS for over a year. “We are just the same as men,’ says Kobani, 28. “We can do any type of job, including armed mobilization.” In addition to battlefield combat, Kurdish forces have sometimes adopted tactics similar to their Islamist adversaries, such as suicide bombing. A female fighter known as Arin Mirkan, conducted a suicide attack against ISIS in Kobani earlier this month. Kurdish sources say that 10 Islamic State fighters, along with Mirkan, were killed in the explosion.

According to figures put out by the Syrian Observatory for Human Rights, more than 800 people have died in the fight for Kobani, on the Syrian border with Turkey. That number includes 302 Kurdish fighters and 21 civilians, in addition to 481 Islamic State terrorists. Not included in these numbers are ISIS casualties from airstrikes by the United States, Britain and other allied nations, which run into the hundreds, according to the Pentagon. Some 200,000 civilians have fled the fighting in that region. ISIS appeared to be on the verge of capturing Kobani until their advance was checked by coalition airstrikes.

For the Kurdish fighters still struggling to defend Kobani, the news that Rehana may have been beheaded will come as a blow to morale. The execution – and even the young woman’s capture – has yet to be confirmed, however.