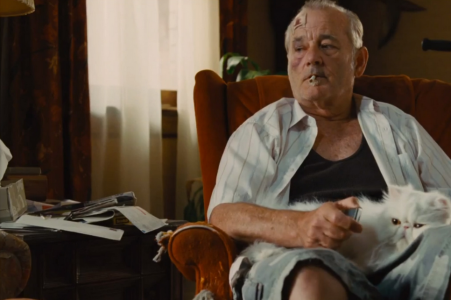 Bill Murray in St. Vincent gives an Oscar worthy performance in a comedy that makes one think and in at least two places in the film cry buckets of those hot schmaltzy tears which are guaranteed to embarrass the men in the audience. The tears are a real surprise as the film plays its comedic moments so well that when the plot takes a shift in direction the audience is caught flat footed and these sentimental moments hit all the harder because of it.

It should be mentioned that before St Vincent rolled, a short film by Jon Goldman was shown. The film, titled Market Hours was written and directed by Goldman and had Gary Cole in a cameo as the market manager. Leonard Earl Howze played Randall, the security guard with a crush on Angela (Hong Chau) and who is in the doghouse for not catching a thief who is plaguing the market hall. The film is cute, touching and delivered a great run up to the main feature. A word to the wise, keep an eye out for Jon Goldman filmmaker extraordinaire.

Directed and written by Theodore Melfi, in what is his second feature length film – the first was the 1999 film Winding Road – and his fourth foray into comedy. Murray stars as Vincent an old man who drinks, smokes, gambles and who has regular sex with pregnant Russian hooker/erotic dancer Daki played with stern comedic timing by Naomi Watts (Birdman, Diana).

At the start of the film, Vincent drives home inebriated, smashes his own fence and then while attempting to separate ice cubes from his freezer with a hammer, hits his hand and while flailing about in agony slips on a bit of ice and knocks himself out cold by hitting a kitchen cabinet with his head. He wakes up when two moving men back their van into his tree, breaking off a branch which smashes his “antique” car.

His new neighbor, Maggie, played by Melissa McCarthy (The Heat, Tammy), offers to pay for some of the damage and Vincent says that since she obviously has no money, he will sue the moving company for the damage to his car and she can pay for the fence and the tree. As the two stand talking, Oliver, played by newcomer Jaeden Lieberher, her son comes up and joins the conversation.

Oliver starts at the Catholic school and his teacher Brother Geraghty, played brilliantly by Chris O’Dowd, asks the new student to lead the class in prayer. The boy stands head bowed and then looks up at the teacher and says quietly, “I think I’m Jewish.” Geraghty points out that out of all the students in the room they have a Buddhist, another member of the Jewish faith, a Baptist and an “I don’t know.” After stating that the last category seems to be on the rise, he then goes on to explain that Oliver’s Jewishness does not exempt him from daily prayers.

St. Vincent does not just feature Bill Murray in an Oscar worthy performance, it showcases all the main actors beautifully. The young actor Jaeden Lieberher joins the existing cadre of talented child actors who can effortlessly carry off being that odd combination of kid/adult. A sort of male version of Dakota Fanning, at the age of 11, he already has the acting chops of an adult. This is only his second feature film, the first being Playing It Cool. The young actor is going to be very busy.

Naomi Watts was a real surprise in this film. Her portrayal of the pregnant hooker who has an arrangement with Vincent was delightfully funny. No doubt the 46 year old award winning actress enjoyed the comedic challenge after being slated almost universally for her role in the 2013 biopic Diana.

Melissa McCarthy showed that she could play it straight for the camera as the stressed out and angry mother going through a divorce. Her performance as Maggie has just the right amount of funny and pathos to make it work. Terrence Howard as the almost reluctant bookie Zucko was a great blend of reluctant thuggery, his boss is owed a lot of money by Vincent and Zucko must collect something, either money or a “pound of flesh.”

The thing that works best for St. Vincent is its onion approach to the lead character. Bill Murray is not just another grumpy old man, he is a Vietnam war hero whose wife has alzheimer’s, or dementia, and is in a “home” that he cannot afford. As Oliver gets to know his next door babysitter better, at the racetrack, the bar and the home where Vincent’s wife lives, more layers are peeled back and the audience see yet another side to this bigger than life character with the ugly cat. Murray’s performance is worthy of an Oscar at the very least. He manages to keep from playing this one for laughs; instead playing the comedic part using a straight delivery with just a touch of that old Murray magic. St. Vincent opens nationwide on October 17. For the love of all that is comedy, do not miss this film.