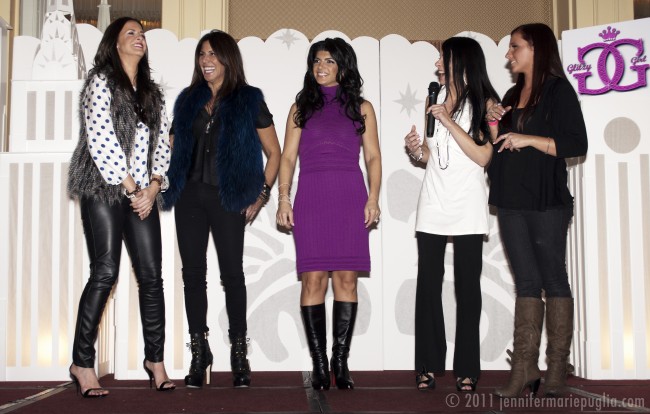 Ever since Teresa Giudice faced a federal judge and was sentenced to 15 months in prison for her role in a fraud scheme with her husband, she has also faced no shortage of judgment from the other Bravo Housewives, as many have popped out of the Bravo woodwork, appearing all too happy to share what they think of her situation. It seems ever since the sentencing on Oct. 2, every Housewife from New Jersey to California has had an opinion to tweet, talk about or tell.

The most recent opinion on Giudice’s affairs comes from Heather Dubrow of the Real Housewives of Orange County. Dubrow told The Melting Pot radio show on iHeartRadio that although she feels terrible for the Giudice children, she does not believe Bravo should continue employing Teresa. She likened Teresa’s wrongdoings to that of any other Bravo employee, saying that if a Bravo executive had done what Teresa did, they should be fired. Dubrow went on to reason that keeping such a person employed is the equivalent of “harboring” a criminal. Still, Heather had hope at one point that Teresa may have learned from her mistakes and appreciated that she had said she wanted to make things right. However, Dubrow said she saw “no remorse” when the Giudices were later interviewed by Andy Cohen on Watch What Happens Live. Dubrow has obviously been watching the case closely, noting details such as the fact that Teresa and Joe pled guilty to 41 counts and that they did not provide full financial disclosure on the day of sentencing.

Dubrow has not been the only one paying close attention to the Giudices’ legal affairs and offering up an opinion. Last night, on the season 6 finale of Real Housewives of New Jersey, cameras followed other cast members as they learned of Teresa and Joe’s sentencing. Teresa’s cousin and cast member from prior seasons, Kathy Wakile, broke down in tears. Onetime friend and original cast member Jacqueline Laurita also cried and debated reaching out to Giudice, deciding ultimately to send a text of support.

Perhaps the most judgmental remarks on the season finale came from fellow cast member Teresa Aprea,, who, while referencing a rumor she believes Giudice perpetuated about Aprea’s family, commented that karma is a “b**ch,” and that Giudice’s disrespect for the Aprea family is the reason Giudice’s family is now being destroyed. Aprea closed with “Clink, Clink” while making a gesture to indicate a pair of handcuffs on her wrists. Ironically, Aprea’s own father – Sal Napolitano, who appears frequently on Real Housewives of New Jersey – served prison time himself fifteen years ago after pleading guilty to violations involving employees of his construction company, who were tasked with removing asbestos, but not provided with the proper safety gear.

Still, other Housewives have been supportive of Giudice. On Oct. 2, the day of sentencing, fellow Housewife and friend tweeted a photo from Instagram of two hands making a heart shape with the caption “Just send love.” Fellow cast member and sister-in-law, Melissa Gorga – one time Giudice rival, was rather quiet on social media on the day of and around sentencing but on last night’s season finale, it appeared that the two women put their prior differences behind them, as they bonded over coffee while their children played together.

As for Giudice herself, often a frequent user of social media, she has been uncharacteristically quiet with only two tweets since Oct. 1. Two days after sentencing she tweeted that all events for her beverage line Fabellini have been canceled until further notice and again on Oct. 16, simply saying “On behalf of myself, Joe & our entire family, we thank you all for your love and support.Xx.”