Texas State Fair Comes to a Close This Weekend 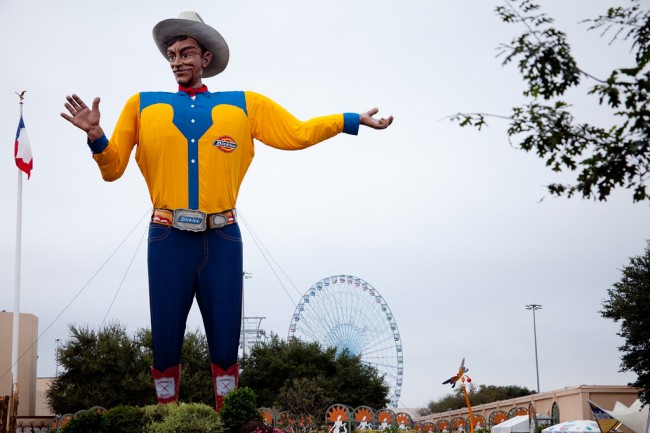 This is the last weekend to see Big Tex at the Texas State Fair, as they will shut down at the close of Sunday for another year. The fair opened on Sept. 26 and runs for three weeks every year from the end of September to the middle of October.

The State Fair has been a staple of Texas for almost a 130 years. Since its creation, the fair has grown into something “Texas sized.” If everything is bigger in Texas, then their State Fair is no exception. Every year people from all over the state come to East Dallas, an estimated 3 million people annually, to take in the attractions, fried food and everything in between.

One thing patrons can not miss is the fair’s icon, Big Tex, a 55-foot statue who has been a focal point at the fair since 1952. The Big Tex people see today is not the original. He was brought down in 1999 for a bit of a face lift and in 2012, during the last weekend of the Texas State Fair, there was an electrical fire that set the icon on fire. The statue that stands today was built and put on display the day before the fair started in 2013.

Over the years the fair has grown into one of America’s largest fairs. Every year something is being added to the line up and this year there is no exception. Often known as a leading attraction is the lineup of fried food. Michael Wilbanks from Fort Worth said, “The fair is the best place to get any type of fried food you can  possibly imagine,” adding, “if it’s been thought of, it’s here.” The fair boasts a large selection of traditional and obscure favorites. From fried Oreos to chicken stuffed deep-fried cupcakes. Even coke and sweet tea can be fried here. This weekend after the Texas state fair closes, the grounds are cleaned and the site remains open as a public park.

The Texas State Fair contains what some might call a freak show, nothing like what is on American Horror, but Fred Lally and his wife operate a curious exhibit called Lally’s Oddity Show where one can see a two-headed turtle or a deceased pig with eight legs. The Lally couple travel around the lower half of the country touring with their exhibit. The fair is generally the last stop before heading home to Arkansas. Another large attraction is the car shows. Mauricio Chi, of Fort Worth said, “The best part was test driving a Chevy Camaro on the Chevy Ride and Drive track.” Along with Chevy, there are new model cars from Ford, Chrysler, Dodge, Jeep, Nissan and Toyota.

There are guided tours of the livestock exhibits daily, where dairy and beef cattle, rabbits, sheep and goats are all on display. There are youth breeding shows, which shows off prize market animals.The Texas State Fair has chosen to bring back equestrian shows such as racing and roping. There is plenty of entertainment, including live music and daily shows. Texas may be closing the state fair come Sunday evening but visitors still have the weekend to get their share of Texas-style entertainment.