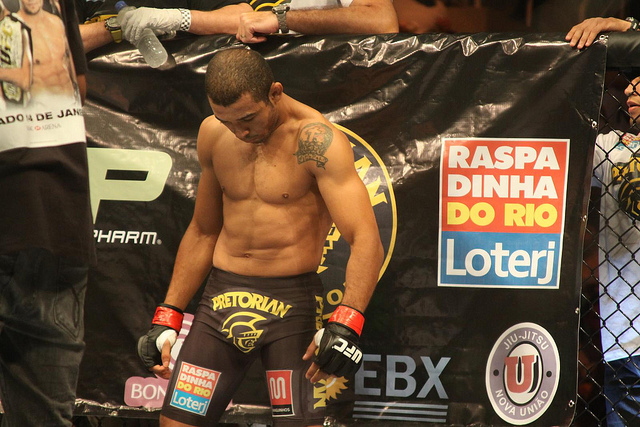 The feud is over and the UFC can now move onto the match the fans are truly dying to see, Jose Aldo versus Conor McGregor. The brash Irishman has to first knock off Dennis Siver, then he can lay claim to the throne. Chad “Money” Mendes gave the champion all he could handle through all five rounds, but it just was not enough to end the reign of Jose Aldo. The two battered and beat each other down during a historic featherweight bout, which alone gave the people their money’s worth in the end. The rest of the main card was a bit disappointing, with Fabio Maldonado pulling off the lone finish on UFC’s main card. As the MMA Spotlight provides analysis for each fight, one can bet to find a common denominator, wrestling, go ahead and take a gander and read up on UFC 179.

Jose Aldo defeats Chad Mendes via Unanimous Decision – It’s only fair that the main event of the night pulls the UFC fight of the night honors as well, this was one of the best wars ever in the featherweight division. Instead of keying in taking Aldo to the ground, Mendes took it upon himself tangle with Aldo in his barn house. The success rate was quite well when the challenger was using constant movement, but when he stood toe to toe with the champ, he did not win very many exchanges. Aldo was able to stagger Mendes a few times throughout the fight, but most notably landed his best sequence of the fight after the bell in the first round, sending his stunned opponent to the mat before the ref was able to step in between to end the round. Instead of relying on a heavy dose of leg kicks, the UFC featherweight champion showed more precise boxing while landing multiple combinations at will on his foe. Team Alpha Male was overflowing with confidence coming into this fight, it will be interesting to see a how a loss from one of the team leaders affects the rest of the crew. Jose Aldo will now probably take some time and await Conor McGregor if he can get past Dennis Siver, or maybe fight the winner of the Cub Swanson and Frankie Edgar fight.

Phil Davis defeats Glover Teixeira via Unanimous Decision – Glover Teixeira was never able to find a rhythm in his striking game, as Phil Davis grappled his way throught three rounds to pick up the victory. It was practically the same story in each round, Teixeira would find a way to land a shot, but “Mr. Wonderful” would charge the Brazilian and press him against the cage and take him down. The scramble attempts were frugal and did not amount too much when he was able to stand back up. The pressure was there from Teixeira early, his take down defense was not though. If Davis could ever develop his striking game into a strength of his, it would surprise none if the Penn State alum fought for the championship.

Fabio Maldonado defeats Hans Stringer via TKO (Strikes) rd.2 – Maldonado is well-known for his gunslinger type style on the fight, firing off body shots like they are going out of style, and usually bating his opponents into a brawl. Stringer avoided the temptation and took down the Brazilian as fast as he could, as he controlled most of round one and two with his top game. Maldonado was able to turn the tide in the 2nd frame and gain top position, then proceeded to throw down bombs, forcing the referee to step in and stop the bout. The rebound victory is bittersweet for Maldonado, as he was knocked into oblivion in his last fight when he stepped up a weight division and got knocked out by Stipe Miocic.

Darren Elkins defeats Lucas Martins via Unanimous Decision – Unpredictability was Elkins game plan here, as he was a very hard puzzle to put together for Lucas Martins. Elkins put together his strikes and wrestling beautifully, even though he did not land all of his take downs, the threat alone kept Lucas Martins hesitant throughout the fight. Formerly the 13th ranked featherweight in the division, Darren Elkins could possibly see a higher tier fighter on his next outing in the UFC.

Beneil Dariush defeats Diego Ferreira via Unanimous Decision – Someone finally gave Diego Ferreira his first loss of his career, was not spectacular showing by Dariush though, as he laid and preyed on the Brazilian for the duration of the fight. Diego’s flurries became predictable when he would rush Dariush, and Beneil could tell early that he could hold down his undefeated foe at will on the ground. Ferreira threw multiple submission attempts off his back, but never found a home with one as Dariush’s submission defense was on point. Dariush has now won three times inside the UFC octagon.

In other notable bouts on the card, Neil Magny was able to tie Roger Huerta with most wins in a year, five in the UFC, as he capped off his night finishing off Macario in the third round. Wilson Reis was also able to pull off the upset, submitting the formerly ranked UFC flyweight, Scott Jorgensen. For all the results from the prelims, please look down below.

After a night of submissions, and a featherweight extravaganza in the featherweight division, the Ultimate Fighting Championship will not return to the cage until November 7th, as they take a trip to Sydney, Australia. The bad blood between Luke Rockhold and Michael Bisping will be settled once and for all, as Ross Pearson and Al Iaquinta occupy the co main event. For anything and everything UFC, follow the MMA Spotlight, for all news and coverage of each event.