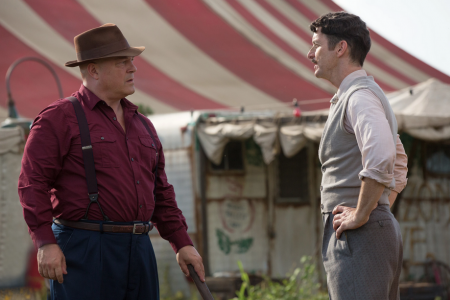 American Horror Story: Test of Strength is easily the most tragic, yet creepiest, episode of the Ryan Murphy creation and it is “adieu Ma Petite” a tiny too trusting soul who learns that one should beware a strongman bearing gifts. Last week’s episode ended with Jimmy arriving at Mott Mansion demanding to speak to the Tatler twins. This week opened with what transpired during that visit. Young Mr. Darling learns that Bette and Dot were sold to the Motts and when he hears Dandy’s version of events the night that Twisty died, Jimmy realises that Dandy was the other clown. He tells the twins that they need to come with him, “Now.”

Dandy speeds up their exit when he overplays his hand, revealing that he read Dot’s locked diary. As rich lunatic tells Dot that he will never allow her to have the surgery that she dreams of, Jimmy interrupts to say, “Cause you’d never cut a girl in half would you Dandy?” This quip points out that he knows that the rich kid was the other murderous clown. The twins opt to return to Elsa Mars and the rest of the freaks. As they leave, the camera moves in on Mott’s face for a close up and one assumes that there will soon be another victim added to Dandy’s collection of bodies in American Horror Story: Freak Show.

Back at the camp, Jimmy sings for Elsa, another anachronistic number Nirvana’s Come as You Are, (The number is below courtesy of YouTube sans visuals, but Peters does the song proud, as they say.) The audience then see the strongman out at the gay bar looking for the boy he is in love with. When the bartender makes a remark he does not like, the man with the “freakish strength” (something that Richard says later in the show) hits him with a bottle and slams his head into the bar, twice. All this is observed by Richard who is in the bar for his own reasons.

This weeks American Horror Story musical number shows Jimmy Darling is furious. Slamming the microphone down and flinging it over during his song. The look on his face shows just how angry he is. At the end of Jimmy’s number, just as Ms. Mars begins her critique, he tells her that they, the freaks, will not listen to her any longer. “We don’t take orders from liars,” says Jimmy and he tells Elsa that they need to hear the Tatler sisters’ version of events, after she “sold them like pets.”

Bette and Dot come out and it is the latter who tells Jimmy he misunderstood. She tells the freaks that they asked Elsa to take them out to the Mott’s place. Ethel and Desiree learn that the good doctor who was treating the bearded lady and promised to give Dupree surgery “killed himself,” which viewers know is not true, Dell did it. The strongman is stopped by Richard, who is messing with the Test of Strength or High Striker. Richard begins making small talk about ringing the bell which is interspersed with a lot of gay sexual innuendo. After saying inflammatory things like “I feel like a fairy” and “What’s wrong, can’t get it up,” Richard gets to the point about seeing Dell at the gay bar.

Dell goes to hit the man with the hammer when Maggie comes out. Richard tells her that everything is okay, that he and Dell are only talking and that they are going in the tent. It is here that Richard refers to Dell’s “freakish strength.” Once inside the flimflam man blackmails the strongman into providing him with a dead freak, “it has to look natural” and after pulling a gun on the other man, tells the strongman what a good shot he is and American Horror Story proves that in this world the gun is mightier than the fist.

After Maggie’s attempt to bid adieu to Ma Petite, in the earlier American Horror Story Freak Show episode it should come as no surprise that Dell ends up targeting this tiny princess in Test of Strength. First, however, Dell tries to take out Amazon Eve who, rather spectacularly, cleans the strongman’s clock for him. She beats him so badly, that he starts crying “Uncle!” The giant ignores his pleas for mercy and knocks him over the head with a wooden decoration. She flings the partly-conscious Dell out of her caravan and looking down at him says, “Who’s the strongman now.”

Word spreads around the camp and for a bit it looks like there may be an American lynching in the camp, but Jimmy says he will talk to Dell man-to-man. The strongman is desperate to save his own neck after being blackmailed and when he sees Jimmy’s “lobster” hands Dell decides to make his own son what the American flimflam man ordered. The two go to a bar and Jimmy tells his father over cheap whiskey that the women want to hang him. The men go on to bond over drinks.

Elsa learns what the Tatler twins want for their lie on her behalf. They reveal that they want 20 percent off of the top of the box office, amongst other things, and when Elsa asks what Dot thinks of her sister’s demands, she says they should get 50 percent of the takings. American Horror Story this week has two cases of blackmail and Dell decides that Richard’s hold over him is not enough to make him kill his son.

Richard is not pleased that Dell did not kill Jimmy and he tells the strongman he has a day to get him a dead freak. Penny goes home to pack her things to move in with Paul, who has survived Elsa’s murder attempt. Penny learns that her all-American dad is even more sick and twisted than she thought. Her father’s parting gift is to have “my friend Morris,” who is a tattooist, come in and ink his daughter’s whole face, and as an added insult, Morris splits her tongue.

Bette and Dot are visited by Elsa after Bette has her hair dyed to make her look like Eve Arden. Upon leaving, Mars leaves a note with Dot. The leader of American Horror Story Freak Show uses the note to drive a wedge between the siamese twins. Penny discovers what her father had done to her and screams. Dot replies to Elsa telling her of her dream, the surgery, and Mars works on getting Richard to help her get rid of the girls. Richard recommends a mercy killing, which Ethel overhears. Elsa tells Richard that the two murdered their own mother and then one twin tried to kill the other.

As Richard starts dessert, one of the most disturbing scenes in American Horror Story Freak Show season takes place; the murder of Ma Petite by the strongman. It is here that the audience of American Horror Story must say adieu to the tiny treasure and Test of Strength ends shortly after this horrific act and Paul learns what happened to Penny. The episode finishes with the proprietress of the museum unveiling the dead body of Ma Petite; floating, eyes closed, in a large jar of formaldehyde.