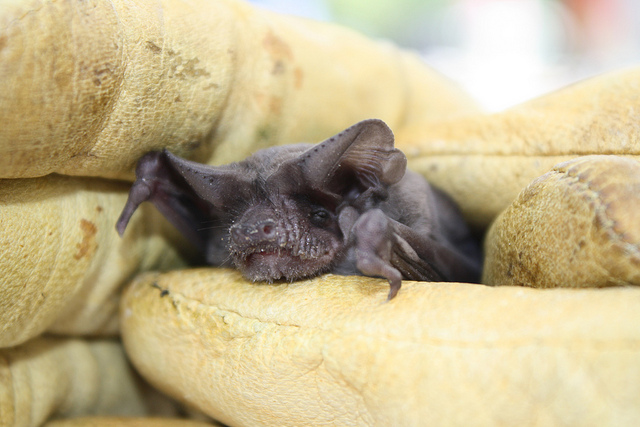 Bats use sonar to jam the signals of rival bats when hunting, according to a recent study in Science Magazine. Bats use echolocation to hunt effectively in complete darkness as well as to communicate, making clicks of varying pitch and frequency. Scientists Aaron Corcoran and William Conner believe they have found a third use for bats’ sonar: keeping rivals from prey.

Corcoran, a biologist at the University of Maryland, happened upon what’s known as the sinFM jamming signal by accident. While studying the effects of the Grote’s tiger moth’s sonar-scrambling clicks on the big brown bat, he noticed a group of Mexican free-tailed bats overhead making their own calls, according to National Geographic. The moths have long been known to use echolocation to disrupt bats’ sonar.

Upon review of the audio data of the encounter, Corcoran found that the Mexican free-tails had been making calls similar to those of the moths. Corcoran began testing the hypothesis that the call’s purpose was the same. Studying the moths’ clicks had predisposed him to hearing the jamming signal, however, and he feared the similarities may have been a product of his imagination, says Corcoran.

Corcoran and Conner began playing recordings of the Mexican free-tail’s sinFM to bats in the wild and saw a drastic decrease in the number of insects the bats caught when they were exposed to the signal, according to National Geographic. The scientists also noticed that timing and frequency were huge factors in the effectiveness of the sinFM. When they adjusted the frequency above or below that of the recordings, the calls seemed to have no effect, and the signals only worked the moment a bat had zeroed in on its prey. Immediately before or after it went in for the kill, the signal again had no effect.

The pair later conducted a more controlled test, hanging a line from a street light and attaching a moth to it, then recording the sinFM’s effects. The findings were unequivocally in favor of the hypothesis, showing that the rate of captured moths dropped from 70 percent among those not hit with the scrambling signal to below 20 percent among those that were. The findings seem to suggest that bats do indeed use jamming signals to disrupt the sonar of rivals and keep them from prey. Corcoran and Conner are not yet sure if the signal gives any advantage to the bat using it, or if it is meant to disrupt rivals for no other reason than to throw them off course.

The jamming signal covers the frequencies bats use to catch prey by rapidly changing pitch, making it difficult for the rival bat to decipher between the sinFM and its own clicks. Conner likens the call to an opera singer’s vibrato and says that when slowed down in frequency, it sounds like bird song. Mexican free-tails are the only bat species known to use the jamming signal, though it is possible other species do as well, according to MSN.

Mexican free-tailed bats are highly social, typically live in roosts of as many as 1.5 million and use up to 15 types of calls to protect their food, communicate with neighbors and, as Corcoran and Conner have shown, to jam the sonar of rival bats. If Conner’s and Corcoran’s findings are correct, says National Geographic, they have discovered the first instance of any animal other than humans purposely disrupting a rival’s senses to compete for food.