Castle Married After ‘It’s a Wonderful Life’ and Sony Link

Fillion Back in the Running for Uncharted Film? 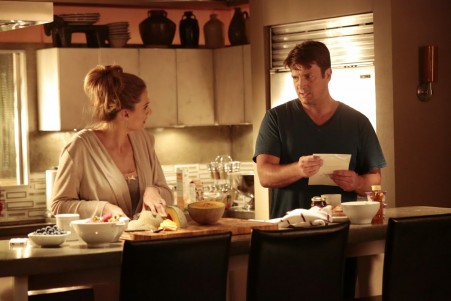 Last night’s episode of Castle: The Time of Our Lives, was clearly a nod to the old Jimmy Stewart/Frank Capra classic Christmas film It’s a Wonderful Life but it looked like the plot contained a link to the planned Sony PS3 game big screen film of Uncharted. For those that may have forgotten, Naughty Dog, the game company who created the Uncharted franchise, with number four heading for a PS4 near you, announced back in 2011 that the adventures of Nathan “Nate” Drake, Victor “Sully” Sullivan and Elena Fisher would be coming to a cinema in the near future.

What does all this have to do with Nathan Fillion, star of Firefly and most recently wed to Stana Katic as his character Richard Castle on Castle? Good question. For those who have not been following the Uncharted breakdown over the past few years, the game which used the voice talents of Nolan North (Uncharted, Assassin’s Creed) and Emily Rose (Uncharted, Haven) and a multitude of other very skilled actors to bring the characters to life, is a Sony fan favorite and helped make Naughty Dog a household name.

The game came out in 2007 and in 2011, after two more games came out under the Sony/Naughty Dog banner in the franchise, it was announced that the video game would be coming to the silver screen. Fans celebrated and many agreed that the one person who should play Nate Drake was Nathan Fillion. The Castle star himself expressed interest back in 2012. Uncharted aficionados felt that as Nolan North would not be used, that Fillion was the obvious choice to play the character, the actor looked like Nate and he sounded like him in speech patterns and line delivery.

Although, the episode of The Time of Our Lives which could be seen as a play on the It’s a Wonderful Life motif used in the show, may refer to The Time of Their Lives. The latter film was a 1946 Abbott and Costello movie that dealt with mistaken identities and time travel. But without going into plot, it certainly seems that the episode is pointing to Hollywood films throughout the show, which leads to that Sony link and the big screen adaptation of Uncharted.

The Sony and Naughty Dog game is meant to be released as a film in 2016. The last word on the movie was that David O. Russell was directing and that Mark Wahlberg would play Drake. Fans were horrified that “Marky-Mark” was to play Nate and the news that Russell was not even aware that fans preferred Castle star Nathan Fillion did not go over well.

If one takes the time to head over to IMDb and look up the 2016 film’s information, there are no names attached to the project in terms of director or cast. Mark Wahlberg and Russell are conspicuously absent. (Granted there are no names anywhere for cast, not even Ellen Page who was touted as being Elena in the big screen adaptation.) So it looks like there may be a chance for Fillion to step into Drake’s shoes at last. Add to that the fact that news on the project is very scant with the last big announcement being in July 2014 in terms of actors at least, anyone could be playing Nathan Drake.

The evidence on IMDb is in plain sight, just as obvious as the the It’s a Wonderful Life reference at the very beginning of the show, “It’s like It’s a Wonderful Life, each time your phone rings you should thank me.” Rick’s quote is followed minutes later, at the crime scene, with Richard finding an Incan artifact and when he touches it, as well as getting blasted by a stun grenade, Castle wakes in an alternate universe where he and Beckett have never met.

In the opening moments of the Castle, there are references to at least two different big screen films, Time of Their (Our) Lives and It’s a Wonderful Life. The plot deals with the latter film’s premise of what if “Caskett” had never met and Rick’s attempts to get back. The Sony and Naughty Dog link, in the guise of the Incan artifact, fits right in with the big screen theme. The item in question not only looks like the artwork on all the Uncharted games but the first in the series deals with Incan gold and an element of the supernatural, folks who find the El Dorado gold in the video game become cursed. If this is not a clear indication that Nathan Fillion is in the running for the 2016 Uncharted film, it must be at the very least a reference. For Castle fans, however, none of this matters, Kate and Rick are finally married and many a fan shed a tear…of relief at this “awwww” moment in the show. Congratulations to Caskett for finally making it official. Next stop, the honeymoon.