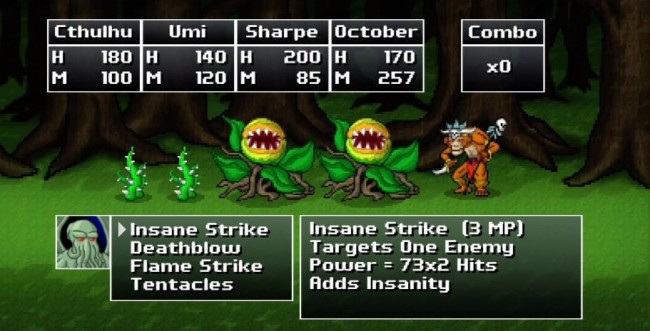 In 2010, Zyboyd games created a retro-style turn-based RPG for the indie game section of Xbox Live. The title, Breath of Death VII: The Beginning went on to reach 40,000 sales and paved the way for their next game, Cthulhu Saves the World. As Cthulhu awakens from his oceanic sleep a mysterious stranger seals away his power. By eavesdropping on the narrator and immediately breaking the fourth wall, Cthulhu learns that he must become a true hero to break the curse and regain his dastardly powers.

“I can save at any time? What is this a first person shooter?”

The premise is rather silly, but so is the entire game. Having a silly premise requires a silly protagonist and although Cthulhu is aware of his cult following and otherworldly power, he is also a goofball. The entire game features excellent and comedic writing, from the enemy descriptions to the quips that come from Cthulhu.

In battle the party has a combo counter, each hit increases the counter (multi hit moves do indeed count for each hit). Certain most such as Deathblow reset the counter after dealing big damage, other moves like Full Heal reset the counter without making use of the tally.

Battles are meant to more treacherous over time, each turn that goes by powers up the enemies. This concept, along with many others comes directly from Breath of Death VII: The Beginning. With this mechanic in place the player is encouraged to speed up battles in order to prevent the enemies from becoming too powerful, this concept becomes a big deal in boss battles.

Battles are tended to in multiple ways to make them more streamlined and helpful, yet still challenging. If the party dies in battle two options are available, giving up or using a 1-up to try the battle again. After every battle the entire battle has their HP restored but not MP, which slowly recharges over time. Also, all party members gain experience even when knocked out or not in battle.

“I just like insane things. Is that a problem?

From the menu screen there is a counter that keeps track of the number of random encounters in each area. If this counter gets down to zero the party will not encounter any random battles in that area. If more battles are desired, the menu has the option to automatically start a fight. If the player is lost in a dungeon they can finish all the battles and freely roam the dungeon to collect all treasures once the counter hits zero. Also, the counter gives the player a strong sense of how powerful their party should be, there is little fear of being under or over-leveled.

Each level that every characters gets has two upgradable options. This branching system creates an individualistic touch to each member and develops a party that is more fully understood by the player because each stat boost and new ability was one that they choose. This character customization keeps the player excited about each and every level.

Cthulhu Saves the World was originally released for Xbox Live Arcade but has been ported to iOS and Android systems as well as Steam. Usually found for a very low price of a few dollars, Cthulhu Saves the World breathes streamlined concepts and excellent writing into the old school world of turn-based RPGs. Ultimately the title is far too good to be overlooked by any RPG fans.