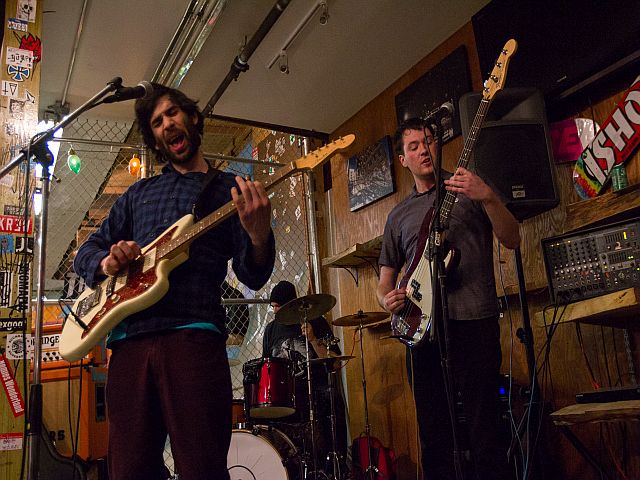 On first listen to EndAnd’s newest album, Fun Times With [email protected]#y People, one might think that between the noisy garage punk and volatile lyrics, this band is angry and out to rebel. While there is a twinge of rebellion just by virtue of their genre, EndAnd seems to be aiming for the shiny, happy side of punk. This is evidenced by smiling frontman Daniel Fern in their video for Choked on Beer, the first single from the album, but also in some of the rhythms and styles that they use throughout the album. EndAnd is a band firmly rooted in punk and noise rock, but they are not without their fun side.

Though only having formed in 2012, EndAnd, comprised of Fern, Daniel Fogarty on bass and Mike Morales on drums, are already attracting a lot of attention in the indie scene. In two years, they have already released four albums, and they do not seem to be slowing down. Fun Times With [email protected]#y People was recorded in one seven-hour session at Sonelab in Massachusetts. Their most recent album, Mechanics & Engineering of Stiltwalking, earned them high marks from Absolute Punk, Punk News and Sputnik Music as well as a headlining spot at the New York CMJ Music Marathon’s Noise Rock Stage in 2013. It seems the band’s bacchanalian style of raucous punk is infectious, and they can certainly bang out releases.

Fun Times With [email protected]#y People opens with Art #1, a very fast Black Flag-like track with interesting interludes of harmonic key blending and guitar shred solos. This is the track which would give first listeners the impression that EndAnd is very serious about its punk. The very next track is Choked on Beer, a much more fun and lighthearted-sounding track, reminiscent of early Dinosaur Jr. The album then barrels on to Much and More About Everything and I Don’t Party, both of which toggle back and forth between classic 80s noise punk and 80s indie tones.

The album ends with two tracks whose titles contain more expletives between them than the number of tracks on the album. These two tracks sound a little angrier and definitely tend towards noisecore more than any other genre, but there still seems to be a bit of fun in the way the songs are composed and the insertion of interesting and unexpected guitar shredding into each of them.

Composition is something which may be overlooked by listeners, as Daniel Fern basically screams the entire album. This adds to its unhinged, rock-until-you-drop sensibility, but each song is very well composed. There is also quite a bit of substance to Fern’s lyrics, as even the most simple-sounding subject takes on a sense of irony and futility, again recalling J. Mascis, The Dead Milkmen or King Missile. This is not just some slapped-together garage punk outfit, much as they would like listeners to believe it is. Fern’s guitar technique is diverse and flexible, and Morales’ drums are fast and masterful with a little metal influence in the kicks, which is no easy task. Daniel Fogarty’s bass keeps up with it all and even stands out from the noise with perfect punk tuning and the ability to improvise when needed.

Taking a cue from Black Flag and other 80s punk masters and adding a dash of college rock with interesting key changes makes Fun Times With [email protected]#y People a fun, raucous album which can be appreciated by all types of audiences. EndAnd’s musicianship, however, is not overshadowed by all this noise. The nuanced composition of the music and emotive quality of the lyrics makes this an album which can be appreciated on many levels, cerebral and party punks alike. Fun Times with [email protected]#y People was released on September 30 and can be purchased on the band’s Bandcamp site, the link for which is listed in “Sources.”