Georgia Stunned by Tech in Overtime 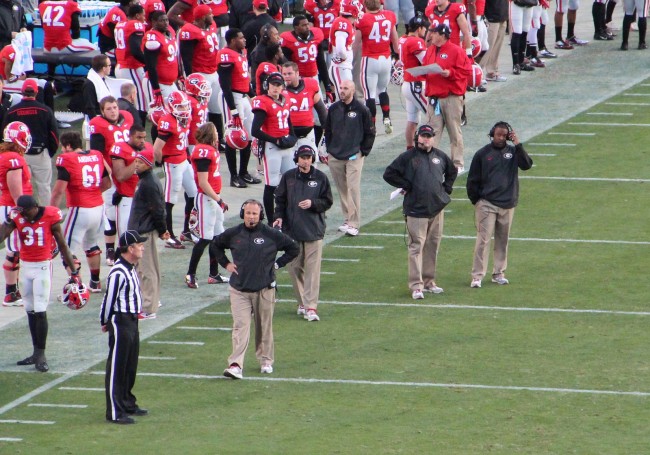 The Georgia Bulldogs’ week went from bad to worse, as they were stunned by instate rival the Georgia Tech Yellow Jackets in overtime 30-24. Georgia was 18 seconds away from victory up 24-21. But their squib kick was returned 21 yards by Georgia Tech’s Justin Thomas. That set up a 53-yard field goal attempt from Harrison Butker. The ball barely cleared the crossbar but it went through sending the game into overtime tied at 24-24.

In overtime, the Yellow Jackets followed the lead of senior linebacker Zach Laskey who capped a five-play drive with a two-yard touchdown. The extra point was blocked, leaving the Bulldogs needing only a touchdown and a made extra point to win the game. Instead quarterback Huston Mason was intercepted trying to throw to Malcolm Mitchell. D.J. White jumped the slant route to make the game-clinching interception.

The loss for Georgia comes one day after they lost their chance of playing for a Southeastern Conference Championship. Missouri clinched the SEC East with their 21-14 win over Arkansas, avoiding a tie with the Bulldogs. Losing Saturday’s regular season finale caps a disappointing week where Georgia was so close.

In Georgia 9-3 seasons are unacceptable, especially this season that was filled with College Football Playoff aspirations. The Bulldogs topped Clemson by 24 in a highly anticipated season opener. But they were stunned by a reeling South Carolina the following week. The Bulldogs bounced back winning five consecutive games, including a 34-0 shutout at Missouri on Oct. 11. But turmoil faced the team with the four-game suspension of star running back Todd Gurley for taking $3,000 from multiple dealers for his autograph memorabilia. Their season was shaken up more when they were drubbed 38-20 by their rivals Florida. Gurley later tore his ACL upon returning from his suspension. Now Georgia’s up and down season is capped with being stunned by Georgia Tech.

As for the Yellow Jackets they gain momentum heading into their clash with Florida State for next week’s Atlantic Coast Conference Championship. They closed their regular season just as they started it, with five straight wins. The gist of their success has been their triple-option attack. It puts their opponent’s defenses on their heels just as the Bulldogs were on Saturday.

The Yellow Jackets gained 399 yards rushing. The Bulldogs seemingly were reeling, as the Yellow Jackets moved the ball on the second half opening possession. That is until quarterback Justin Thomas was stripped of the ball at the one-yard line. Bulldogs senior cornerback Damian Swann took the ball and returned it untouched for a 99-yard touchdown to put them up 14-7 in the third quarter. But the Yellow Jackets would respond to tie the game with Laskey’s first of three rushing touchdowns.

Following a Bulldog field goal, Laskey scored a second time to give the Yellow jackets the lead at 21-17 with 2:41 remaining in regulation. The Bulldogs answered on the ensuing possession, as Mason found Mitchell for a three-yard touchdown to give them the lead back with 18 seconds. Victory was so close for the Bulldogs, instead Georgia was stunned by Georgia Tech in overtime. The Bulldogs’ breakdown on the squib kick led to Butker made the 53-yarder to push the extra session, and eventually defeat.