Giants Continue to Struggle After Another Loss Despite Great Catch 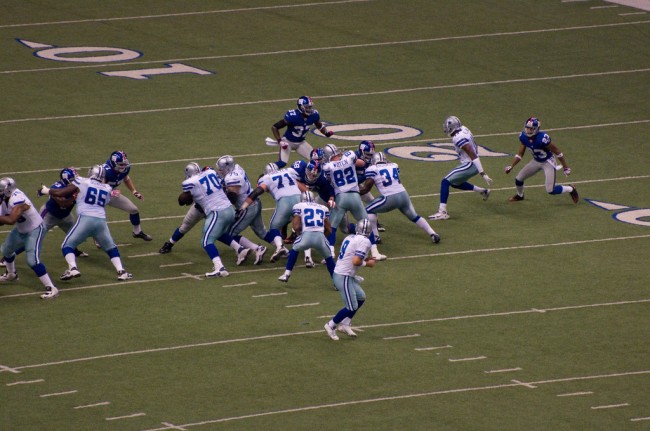 The New York Giants are struggling with a horrendous record just before Thanksgiving for the second season in a row. They already are effectively eliminated from playoff contention with a dismal 3-8 record. With last evening’s loss to the Cowboys, New York has dropped six straight games. Dallas was fighting to stay tied atop the NFC East with the Philadelphia Eagles, while the Giants are just trying to stop the bleeding at this point.

On a positive note, New York did play much better the last two games. Defensively, they were solid last week against the 49ers. They were able to plug up some of the gaping holes that opposing offenses exploited in the prior four games, all losses, that the Giants have played. Yet, while the defense was not a problem last weekend, the offense was, and it is getting frustrating for head coach Tom Coughlin, who is not so much concerned right now with his team’s chances for making the playoffs as he is with them just finding a way to play one complete game on both offense and defense. During the six game losing streak, the Giants defense was a liability through the first four games, allowing record yardage and losing by an average of over 18 points per game. But after the defense finally stepped up and played well last weekend against the 49ers, the offense dropped the ball, as the running game was largely irrelevant, and quarterback Eli Manning threw five picks.

The Giants tried to mix it up on the offensive line in an attempt to plug some of the holes there from the game with San Francisco. The results, however, were mixed. Rashad Jennings ran 19 times for 52 yards, although the Giants running game was again mostly not a factor. Quarterback Eli Manning completed 29 of 40 pass attempts for 338 yards and three touchdowns, with one interception. While Manning managed to keep it to only that single  interception, it nonetheless proved very costly. It came in the third quarter, with the Giants leading at the time, 21-17, and in good scoring position to build on that lead. Instead, his interception ruined that opportunity, and Dallas quickly responded with a touchdown of their own to claim the lead for the first time in the game. That was a swing of potentially 10 points, and possibly more, and came at a point in the game that was key for both teams.

New York was not done yet, however. They managed to get a touchdown for an apparent win late in the fourth quarter, when Manning found Adrien Robinson in the end zone from one yard out. It provided the Giants with a 28-24 lead with only three minutes left to play in the game.

However, the Giants defense, which has played better in the last two losses, nonetheless proved unequal to the task. The Cowboys mounted an impressive drive of their own that culminated in a 13-yard touchdown pass from Tony Romo to Dez Bryant, stunning New York and securing a 31-28 win for the Cowboys, allowing them to keep pace with the Philadelphia Eagles atop the NFC East standings. Philadelphia will visit the Cowboys in Dallas for a huge showdown on Thanksgiving.

The Giants are clearly struggling after another tough loss. Yet, despite the loss by New York, the game will likely be remembered for one play by their star rookie wide receiver, Odell Beckham, Jr. He had a banner game, pulling in 10 receptions for 146 yards and two touchdowns, but there was one particular touchdown catch early in the second quarter that likely ranks as one of the greatest plays in NFL history. Beckham scrambled down the right sideline and was fouled on the play by Dallas cornerback Brandon Carr, yet still managed to reach backwards for the ball with three fingers, and bring it in for a spectacular touchdown that gave the Giants a 14-3 lead. Some are already considering it the greatest catch in NFL history. Still, the Cowboys managed to upstage the Giants in the end, handing New York a sixth straight loss.

The Giants continue to struggle this season following another disappointing loss. Coughlin wants to turn things around for this organization, and at least one former coach from some happier days for the team believes that he can do it. Kevin Gilbride, who was the offensive coordinator for the Giants during their Super Bowl run, felt that Coughlin is the man that can still turn this team’s fortunes around entering this game, and get them back to being a contender. This was a very costly loss for New York, however, as it effectively knocked them out of any slim chance that they still had to compete for the NFC East title, or even a playoff spot. Time is running out on the Giants to do something truly impressive this season.

More Articles By This Author:

ESPN – Giants D Can’t Get Stop When It Counts