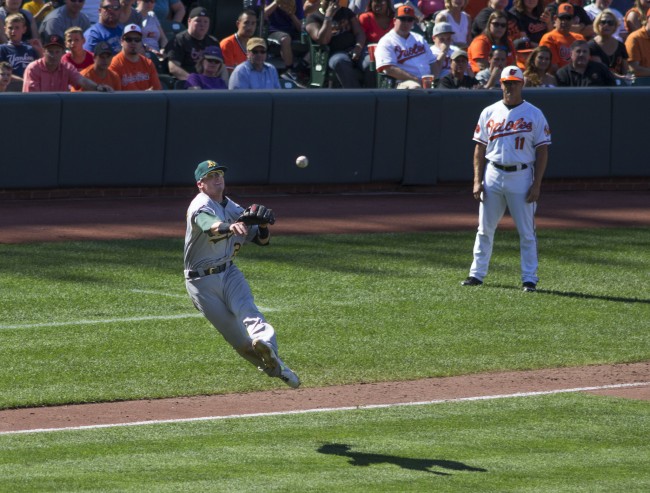 The Oakland Athletics have traded with the Toronto Blue Jays  for several players in exchange for Josh Donaldson. The Athletics announced the trade officially late Friday night. In return, the Athletics will receive position players Franklin Barreto and Brett Lawrie, as well as rotation support Kendall Graeman and Sean Nolin.

Initially Oakland was unwilling to part with Donaldson. General manager Billy Beane considered the fact the team finished 11 games behind the Los Angeles Angels in the American League West, and felt a drastic change had to be made. Beane released a statement addressing how the team felt they had to rebuild the roster for a long-term solution. Trading Donaldson and getting four players back was hard to pass up.

Toronto originally approached the team earlier in the offseason when Oakland was unwilling to trade Donaldson. The Blue Jays went back and sweetened their offer, eventually convincing the Athletics to trade him. Beane feels strongly about the assets they were able to obtain in the trade. Lawrie will move right in to third base to replace Donaldson. He also felt that both Nolin and Graveman are ready to pitch consistently at the major league level.

In Josh Donaldson being traded to the Blue Jays, Toronto gets one of the best defensive third baseman in the game. He had a .952 fielding percentage, committing 23 errors in 150 games at third. He posted a 2.7 defensive wins above replacement, tops at his position in baseball last season. He also brings a bat to his game. He hit 28 home runs and batted in 98 runs in 2014, both tops in majors among all third basemen.

Simply put, Toronto is getting arguably one of the best all-around players in baseball. Donaldson posted a 7.4 wins above replacement. Only Mike Trout, who was named AL Most Valuable Player, had a better WAR at 7.9. Those numbers are why many analysts and fans are scratching their heads as to why Josh Donaldson was traded to the Blue Jays. Donaldson, himself, was “shocked” by the trade he told the San Francisco Chronicle.

Unfortunately for the Athletics, trading away their star players is the norm. Beane built his reputation on what is referred to as “Moneyball.” A movie was made on him and his strategic thinking to building a major league roster titled after the term. Revamping the clubhouse is a common theme in Oakland, and they have some young assets. Lawrie is 24; he will get the opportunity to play every day. In 63 games at third for Toronto he had an impressive .984 field position. Playing him for 150-162 games is intriguing, and that was ultimately the deal breaker for Beane.

While the rebuild is on for Oakland, Toronto has aspirations of competing in the American League East. The Blue Jays’ addition of Donaldson gives them a formidable lineup. Donaldson joins Jose Bautista and Edwin Encarnacion, making one of the better three-man power hitting combinations in the league. All three were in the top 10 in home runs in the American League a season ago. Together they combined for 98 home runs.

Toronto also added catcher Russell Martin from Pittsburgh through free agency. Ironically for Toronto, adding this firepower is, from them, recognizing the 13-game gap between them and the first place Baltimore Orioles. Unlike Oakland, the Blue Jays are choosing adding pieces to close the gap. The Blue Jays trading for Josh Donaldson caps their efforts in doing so.