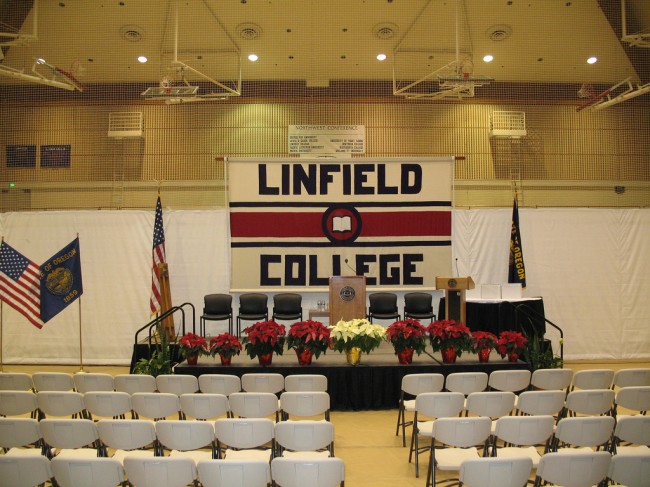 A student from Linfield College was stabbed to death at a 7-Eleven late Saturday night. The suspect returned to the scene still armed, and after a confrontation with the police was shot. He was taken to a hospital, but died later on that night. The name of the suspect has not been released, but the victim’s identity has been confirmed as Parker Moore.

Moore was a sophomore at Linfield College where he was majoring in business management. He was originally from Woodinville, Washington and was recruited by Linfield to play football. In addition to being a linebacker for the team, Moore was also a resident advisor. There has currently been found no connection between the Moore and the suspect who stabbed him. Police described the event as “random” saying that suspect did not have a serious criminal history and was also not a student at the university.

Police responded to the call at the 7-Eleven, which is just across the street from the Linfield campus entrance, at around 11 p.m. They found 20-year-old Moore who was stabbed several times with a knife according to reports from police. The suspect had left the scene before officers arrived. According to Capt. Tim Svenson of the Sheriff’s Office of Yamhill County, the suspect returned to the scene as paramedics and police were there working on Moore. Svenson said a witness pointed the suspect out to police who then confronted him telling him to show them his hands. The suspect then produced the knife and, after refusing to put it down, was shot by officers at the scene. He was transported to Willamette Medical Center and died later that night.

A statement made by the president of Linfield College, Thomas Hellie, confirmed that the Linfield student had been stabbed to death. The statement went on to describe the incident to students, reassuring them that there was no threat to their safety. Hellie said that counselors would be made available for any members of Linfield, including both staff and students, that needed support after the incident. He called on college members to support one another through the mourning process and to continue to pray and keep the family in their prayers.

Linfield college is a private school with around 2,500 students. Its located roughly 40 miles outside of Portland and is a liberal arts college. Their football program, which Moore was recruited for, belongs to NCAA Division III according to their website. The team, named the Wildcats, belongs to the Northwest Conference and has won 58 years consecutively making it the longest winning streak in the country.

The investigation into the stabbing to death of the Linfield student is underway. According to police, it appears that Moore and the suspect had not had any prior run ins, did not know each other and that there was no evidence of an interrupted robbery. Authorities have not looked at the video surveillance of the store yet and are requesting that anyone who may have information explaining the incident to please come forward.