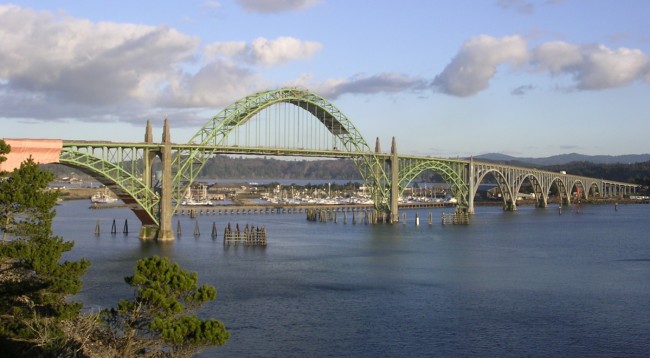 An autistic 6-year-old named London McCabe is dead after his mother allegedly threw him off a Oregon bridge in the town of Newport last night. Jillian McCabe, 34, has been jailed for murder after reporting that she had thrown her son off the Yaquina Bay Bridge. She told police that she heard voices in her head telling her to do it.

The Yaquina Bay bridge, one of the most famous along the Oregon Coast, opened in 1936 and is listed on the National Register of Historic Places. The drop to the water from the bridge’s highest point is 133 feet. Newport police and fire departments, Lincoln County sheriff’s office and the Coast Guard all searched for the boy’s body, which was found about 10:30 p.m. east of the bridge.

McCabe called 911 at about 6:25 p.m. to report what she had done. Witnesses had seen the incident, recalling that they saw a woman and child walking hand-in-hand to the south end of the bridge, where she then threw him over the side and into the water below. One witness said the woman did not look strange at all, and the boy did not seem to be struggling, although he was being dragged along a bit, “like as if you were at a grocery store.”

Law enforcement officers immediately began looking for the boy. Newport, Ore., chief of police Mark Miranda said that the autistic child’s mother was calm and cooperative, allegedly telling the police that voices in her head had told her to throw her son off the bridge. McCabe reportedly lives in Seal Rock.

According to NBC News a woman with the same name created an online donation site for an autistic son named London. The website says she lives in Hood River. She described herself as a stay-at-home mom, taking care of her son. The site said that her husband, Matt, had a mass in his brain stem and had been diagnosed with Multiple Sclerosis. She said she is now taking care of both Matt and London full-time and is applying for any assistance available, and needs help.

Matt McCabe’s blog posts hinted at trouble with the family beyond his medical struggles. He wrote that he and Jillian were living apart. In September, he posted that she had moved back in and things seemed to be improving. A YouTube video posted online in October showed the three celebrating London’s 6th birthday. In the video Jillian hugs London, and claps and cheers as he blows out the candle on a cupcake.

London’s body was discovered near the marina at the Embarcadero Resort in Newport. Jonathan Klingenberg, a Coast Guard spokesman, said they received a call after a person spotted a body from a restaurant located near the Yaquina Bay Bridge. The bridge was closed for about an hour while the search took place.

The Newport, Ore., mom has been arrested on charges of murder, aggravated murder and first degree manslaughter for allegedly throwing her autistic son off the bridge. Her bail is set at $750,000. Andrew McCabe, London’s uncle, said the family was devastated. He said London was a good kid who loved hats and his dad.