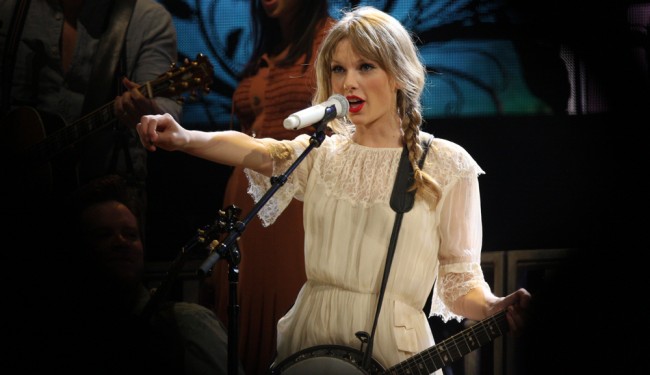 Taylor Swift continues to prove that music streaming is bad news for artists. She took the top spot on the Billboard albums chart for the third week running. Not even Foo Fighters was enough to knock her off.

Many believe that this could be because her music is no longer available on Spotify for free streaming. It is forcing her fans to go out and buy the albums, rather than downloading them from somewhere. Within the first three weeks of 1989 being made available, two million copies have sold. She sold just 312,000 this week.

When it comes to singles, Blank Space has now knocked her single Shake It Off from the top spot on the Hot 100 chart. It doubled the number of sales to selling 328,000 downloads this week. She is the first woman in the 56 years the chart has been running to knock herself off the top spot.

Foo Fighters took the number two spot on the album chart, selling 190,000 copies. Pink Floyd and Garth Brooks took the next two spots, despite not releasing studio albums for years. Brooks is another to follow Swift’s lead by taking his music off Spotify. There is the possibility that helped him reach the number four spot with 130,000 copies of his album Man Against Machine sold.

It could be bad news for music streaming services like Spotify. If other artists believe that putting the music on there is limiting downloads and sales like it did Swift’s, it could lead to them removing their music. Swift is certainly continuing to prove that music streaming is bad news for artists with her results.

This could be an anomaly, though. There are plenty of other artists not on the music streaming services, and they do not see the exceptionally high sales. The country-turned-pop singer has made headlines over the last two weeks for her decision to pull her music from the service. There was no warning, and a number of people have spoken out in her defense for removing the music.

Just last week her music label discussed the pay that she was not receiving by having the music there. Spotify CEO Daniel Ek said that she should have earned $2 million for the first year, but the music label claims she has seen less than $500,000 for the amount of times her music has been streamed. Ek continued to say that she could make $6 million by keeping her music on the site. However, it seems like she could make much more through her own album sales, even though people will likely only buy once.

There has been a small number of artists removing their music from the streaming service, but nothing to make the company worry too much. However, Spotify may have to look at changing its business model if it does want to succeed. SoundCloud just recently had to change to really compete in the music. It will be especially worrying now that Swift is proving continually that music stream may be bad news for artists around the world.