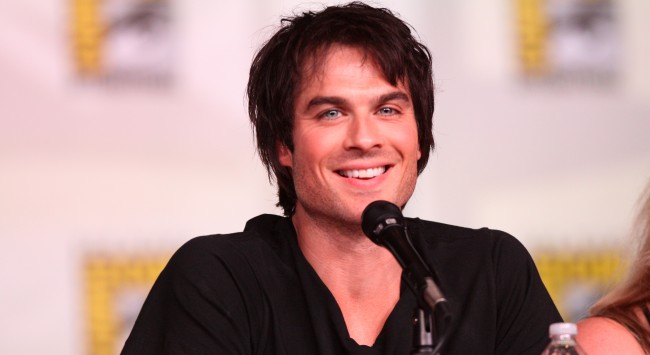 The Vampire Diaries may have thrown a spanner in the works for Delena shippers last week, but it seems like Damon Salvatore may be becoming a mature vampire. That is something the actor who plays the character, Ian Somerhalder, believes. It was a big thing for Damon to let Elena go.

Fans at the end of episode seven of season six were upset to see Damon walk away. Of course, it led to him finding the teddy bear with Bonnie’s magic, but it meant the end of Delena. That is what the writers wanted people to believe, anyway. Those who have seen this week’s episode of The Vampire Diaries, will know that there is still some hope for them.

Somerhalder explained Damon’s decisions, and it certainly makes sense. It was difficult for the older Salvatore vampire to come back. For the past four months, the only thing that kept him going was Elena. She was the driving force that kept him sane, and meant that Bonnie sacrificed her own safety so the two could be reunited.

As soon as Damon turns up, he finds out that Elena has compelled all her memories to disappear. All she remembers is the bad, and Damon has certainly done enough of that.

There have been a number of mature moment throughout the seasons, but the end of the last The Vampire Diaries episode was one of the biggest for Damon. After a whole episode of trying to get Elena to remember, he realizes that she is willing to kill herself to remember. It’s up to him to safe her from that fate. He cannot lose her, especially not like this.

Not only has Damon decided to let Elena go, he has also focused on doing something good with his free time. He has not used it as an excuse to terrorize the town or kick off. There has been minimal drinking, and he has taken to helping Bonnie instead. Bamon shippers have a renewed hope that there may be something between them. After all, they spent four months talking and playing Tetris.

Bonnie has certainly been a driving force for this new Damon. She has encouraged him to remain calm and assess the situation. It has been her that has helped him grow up on The Vampire Diaries. There is a soft spot, but maybe not a romantic one. It is almost as if Bonnie is the little sister Damon never really wanted.

The Vampire Diaries will be really interested if (more likely when) the group saves Bonnie. There will be questions over why Damon lied, but it will be interesting to see that relationship blossom over time. Many fans will want to see Bonnie see the type of man that Damon has become since returning from the dead.

Right now Damon is trying to do the right thing. He is not thinking about what he wants or thinks he needs. He is thinking about the people around him. This includes the likes of Elena, Stefan and Caroline. Damon Salvatore is becoming a more mature vampire on The Vampire Dairies.