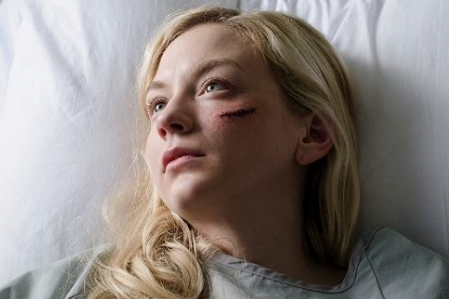 The Walking Dead midseason finale felt like a 1950s song title, “Hello Eugene, Goodbye Beth.” While not as catchy as “Hello Mary Lou, Goodbye Heart,” the idea is the same, Eugene showing up, albeit still unconscious or asleep, and Beth getting taken out at the episode’s end equalled loss of heart. As in broken. The wails of grief could be witnessed on Twitter as fans of the show all expressed their dismay that Maggie Greene’s younger sister was shot through the head after the tense trade off in the hospital corridor.

This particular episode was very intense, to say the least, and Rick showed once again that his farmer side is dead and buried (as dead as Beth). When the former lawman ran down Officer Bob and then coldly shot him in the head, the reaction was one of shock. To give Grimes credit he did tell the fleeing cop three times to stop. While it may seem pretty savage that Rick shot the man point blank, at least he killed him in a way that would keep him from turning in a walking, shambling zombie.

After watching this season’s Beth storyline, there could not have been a fan anywhere, who did not want to see that crazy control freak Dawn “get hers” before the mid season finale of The Walking Dead, all the more so after her “by the way” deal where she changed the terms and demanded that Noah be returned. That she would pull that was not surprising, what was though was when Abraham says hello by slamming the fire truck in front of the church at the beginning of the episode. Seeing the sleeping, or passed out Eugene brought about a sense of relief that he had not died from being beaten earlier. However, saying goodbye to Beth later in the show, destroyed any bit of well being from this particular sight.

Out of all the characters who could have been sacrificed in this show, for instance Father Gabriel, losing Beth hurt the most. As surprising and shocking as it was when she was shot, the incident felt like it had been coming for some time. The youngest Greene daughter was slated to go up against Dawn from the very first moment that the woman smacked Beth across the face with her blackjack. Carol being brought in may have put the final confrontation off for a little while, but viewers have always known that there was going to be a showdown.

When Beth comes to Dawn’s aide by pushing the male cop down the elevator shaft, this very act of self preservation/murder took her that one step closer to taking out Officer Lerner. The Walking Dead has been teasing and hinting that Beth would be leaving this season. Her demise was even signposted in the last season when she was kidnapped by the black car. This young girl had one of the biggest character arcs in the show and her death in The Walking Dead fifth season hurts.

If Twitter had an audio stream, it would feature fans sobbing at the death of this character who grew so much in this season. Saying goodbye to Beth in The Walking Dead mid season finale and hello to Eugene was hard to take. It was also deeply ironic that Noah, who wanted so badly to save his friend was indirectly responsible for her death. Fans of the show joined in with Daryl as tears streamed down his face before dispatching Beth’s killer and this feels even more upsetting than the death of Hershel. It may take until February 2015 for fans to get over Beth dying in Coda.