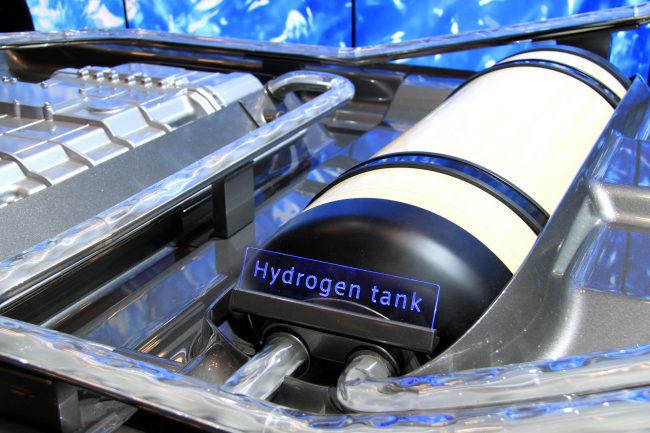 In an ambitious undertaking matched only by the release of the Prius in 1997, Toyota introduces the Mirai, which runs on hydrogen fuel cells. The concept model, known as a fuel cell vehicle or FCV, appeared in auto shows across the nation and is expected to enter the consumer market next year.

With a name that translates from Japanese as “the future” the four-seat mid-size sedan uses the same type of technology used to power the Apollo mission to the moon in 1967. The engine contains a battery, hydrogen tank, and fuel cell which create electricity by combining the hydrogen with oxygen in the air. It creates fresh water as a byproduct with harmless water vapor as an emission.

Current battery-only vehicle models have a limited range of 100 miles and often require hours of charging time. The Mirai offers a range of 300 miles and only takes five minutes to refuel, making it appear as a clean and practical green car option.

Toyota will start selling the FCV in four Japanese cities on December 15. U.S. and European sales will start around the fourth quarter in 2015. Global sales are limited to 700 units due to the lack of available fuel stations at this time.

However, Toyota seeks to sell up to 3,000 Mirai by the end of 2017 and increase those sales to “tens of thousands” in the 2020’s, according to Toyota Chair, Takeshi Uchiyamada, who lead the development of the Prius. Expected price tag in the U.S. is around $57,500 with discounts possible due to state and federal energy incentives.

Hydrogen as an auto fuel inspires some controversy, including Tesla executive, Elon Musk, who is not shy when expressing that hydrogen is an inefficient automobile power source. Many more believe it is the future and will practically eliminate humanity’s dependence on fossil fuels. As a very clean, high-portable energy source that is easy to use, consumer applications could be endless.

The automaker is accustomed to cynicism and defeated it with the development of the Prius, the first gas-electric hybrid. Since introducing the Prius in 1997, it is one of the company’s most popular and profitable models. By introducing the Mirai, and showing the feasibility of cars running on hydrogen, Toyota hopes to duplicate its previous success with the Prius.

Fuel pressures appear to be the largest barrier at this time. In response, Toyota is also promoting their development of hydrogen fuel stations. Efforts to these facilities in the U.S. focus currently on California, New York, New Jersey, Connecticut, Rhode Island, and Massachusetts, the expected large markets for the Mirai. Last May, Toyota loaned $7.3 million to First Element Fuels to start construction on 19 stations.

Akio Toyoda, the company’s chief executive officer, explains hydrogen can be made from almost anything on Earth, including plants and even garbage. Although it does not exist independently in nature, it can be extracted from natural materials using manufacturing processes. It is also a byproduct of hydrocarbon refining, allowing another ready-made source for the fuel.

The Toyota Mirai will likely not remain as the only available model running on hydrogen. Immediate competition includes Honda, which released the first FCVs in December 2002 but is not releasing any new FCV models until March 2016. Other auto industry rivals are watching consumer response before investing in their own fuel cell developments.