‘Agents of S.H.I.E.L.D.’ What They Become Winter Finale (Recap and Review) 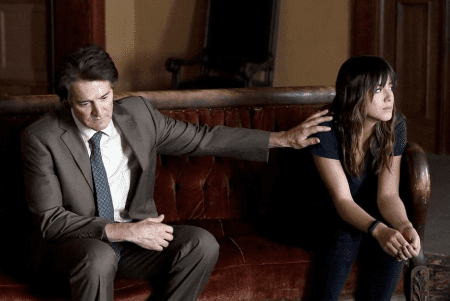 Agents of S.H.I.E.L.D. in this winter finale episode, What They Become pulled out all the stops and made this well worth waiting for. There were some pretty amazing moments in the show where Skye (aka Daisy) finally mets poppa, The Doctor (aka Cal), Raina meets her destiny, Phil Coulson performs some kick-a** moves and Skye gives Grant Ward what he deserves. Last week’s episode left off with HYDRA coming after May and the bus. The female agent proves why she is the pilot when she outmaneuvers the baddies and their missiles.

Melinda May is pretty upset that Grant managed to leave the plane with Skye and Bobbi is sent to speak with Diego to get information and Trip gets some old fashioned detonators to set off the bombs in the underground city. Skye threatens Ward just before meeting her overwhelmed father, “I promised myself I wouldn’t get emotional.” After introducing himself, “I’m Cal, I’m your father,” he admits he is nervous and talks of how he wanted their first meeting to be different, “little almond cookies, flowers maybe…” The man is clearly disturbed yet one cannot help but feel that his madness came about from the death of his wife and the kidnapping of his only child. Cal, or The Doctor, may be a homicidal maniac but he is a father driven by his need to see Skye fulfil her destiny and he wants revenge against Whitehall for the crimes the HYDRA head committed against his family.

The scene between Skye and Cal is surreal, amusing and frightening. The Doctor, after telling his daughter about what happened to her mother, stands and declares that now Whitehall has reunited him with his only child, he will kill him, “Best day ever,” he says beaming down at Skye before leaving the room. Meanwhile Coulson sets things in motion with his agents to seal the alien city and to rescue his surrogate daughter Skye.

By the midway point, Agents of S.H.I.E.L.D. What They Become has Whitehall confronting Grant about Skye’s being at HYDRA and he forces her to touch the obelisk, she does and uses it to kill one of the HYDRA agents in the room. Cal tells Whitehall that he would kill him if his daughter was not there. Raina reveals to Whitehall why Ward brought Skye. The implication from Raina is that the “real” Grant Ward has still not been revealed to Skye, whom he loves. While this is not too surprising, it has always felt that out of all the agents and former agents hanging around Grant still has many layers left to reveal, this winter finale kept piling on the suspense and action.

As Coulson’s agents split into two groups, Fitz, Simmons and Trip get the tunnel and Phil, May, Bobbi and Lance go to get Skye, The Doctor, who was disabled by the HYDRA head, removes the device that rendered him helpless and overpowers a guard so he can kill Whitehall. He leaves Skye and Grant tied up and just as he comes into contact with an armed Whitehall, Coulson shoots and kills the villain. Agent 33 stops an immediate confrontation between Phil and Cal. Once they both escape the May look-alike’s gunfire, Coulson and The Doctor get into a prolonged fight where the new Agents of S.H.I.E.L.D. director show he has some great moves.

Meanwhile Grant cuts Skye loose and as he turns to lead them out, she grabs a gun and shoots Ward several times. “Never turn your back on an enemy,” she says, “You taught me that.” Ward looks at her in disbelief as she leaves. Skye stops her father from beating Coulson to death by calling him dad. The Doctor leaves and Skye tells Phil that she couldn’t kill Cal, even if she had wanted to and that she will make things right by destroying the obelisk.

Agent 33, distraught that Whitehall is dead, helps Grant so the two of them can escape. Skye learns that Raina has taken the obelisk into the tunnels already. Mack, who is still possessed, leads Raina to where she needs to go. Skye follows. Phil Coulson goes into the tunnel after her against May’s advice. Fitzsimmons and Trip get all the bombs set only to learn that Raina, Skye and Phil have gone into the tunnels. Agent Triplett leaves the other two agents and goes back into the tunnel.

While Trip races to disarm the explosive devices, Phil rushes to save Skye, who after meeting the new Mack, goes in the chamber to stop Raina. Before she can shoot the other woman, the obelisk gets placed on a pedestal in the middle of the room, by lighting up and floating itself there. The chamber begins to close up and as Phil gets close Mack attacks him. Trip manages to get in before the room is closed off.

The obelisk opens and blue crystals sprout out of the top. A blast of smoking air flashes from the item and both Raina and Skye are enveloped with a black substance. Skye calls out Trip’s name and he kicks the crystals to make them stop. It explodes on contact with his foot and two shards puncture his chest turning him to stone. Seconds later Raina and Skye burst out of their black shells. A horrified Skye watches as Trip crumbles to pieces, dead.

Agents of S.H.I.E.L.D. ends with a creepy man with no eyes answering a telephone and saying that there is “someone” new, but he is “on it.” This winter finale episode What They Become has brought this first part of the season to a frustrating, yet oddly satisfying, temporary close. Agents of S.H.I.E.L.D. will not return until March 3, 2015 and it is not too difficult to predict that the wait is going to be agony.