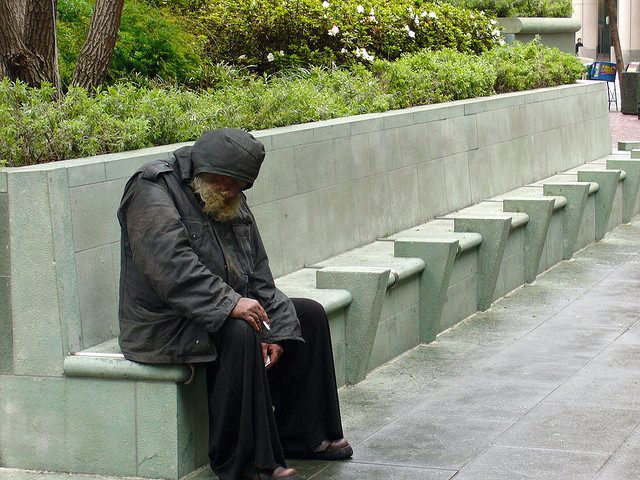 Three days after a California homeless camp was dismantled in Silicon Valley evicting more than 200 of the city’s destitute, San Jose residents wonder what’s next for the occupants. The tech-giant city in the San Francisco’s Bay Area was disassembled by 30 police officers, 15 social workers and dozens of construction workers in an effort to clear the community known as The Jungle, Thursday.

Residents of The Jungle were warned with a 72-hour eviction notice from the city alerting them to pack up and leave the area by Thursday morning. Ray Bramson, San Jose’s homelessness response manager says the eviction followed 18 months of assisting residents into shelters and homes, according to reports in Aljazeera America. Bramson says so far his organization has housed 114 people in the months prior to the shutdown.

The densely wooded area,unbelievably located in the heart of Silicon Valley, will be fenced off and monitored by police officers to ensure no residents sneak back onto the property. The 68-acre California homeless camp bordering Coyote Creek was cleared by the city due to pressure from the community regarding unsanitary conditions, smells and fear of pollution seeping into the region’s water system.

Bramson says the closure is also for the safety of the homeless. In an interview with San Francisco’s CBS KPIX, he says residents are under constant threat of flooding and violent acts. Officials also fear the danger of unsafe structures built by the occupants.

This is not the first time the California homeless camp was dismantled in Silicon Valley, the last time being in May 2012. Erected around 10 years ago drug abusers, the physically and mentally ill, and the city’s destitute and out-of-work built the area as a haven. Around 7,600 homeless residents inhabit the city of San Jose and there are a reported additional 274 tent cities in the area.

California’s Silicon Valley is generally famous for being the home to many tech startups and tech giants like Apple, eBay, Google and Yahoo, however the city is also believed to be known as the location for the nation’s largest homeless camp. According to Aljazeera America, occupants of The Jungle were forced to seek shelter elsewhere with many ending up alongside the busy San Jose road, under bridges and in shelters.

The largest provider for the homeless in the Santa Clara County, HomeFirst, set aside 27 beds at nearby shelters. In a 2013 analysis by the Housing Trust of Silicon Valley, Santa Clara Country faces a $222 million gap in yearly funding needed for affordable housing, reports The National Journal.

Bramnson says his organization realizes that there needs to be a solution to the underlying problem that created the encampment, homelessness. For many of San Jose’s homeless, finding housing in one of the wealthiest and fastest-growing regions will be a problem. Silicon Valley is one of the most expensive areas for renters.

The California homeless camp’s dismantling in Silicon Valley is the second phase of the $4 million project. Crews are to continue taking down the area for another two weeks.