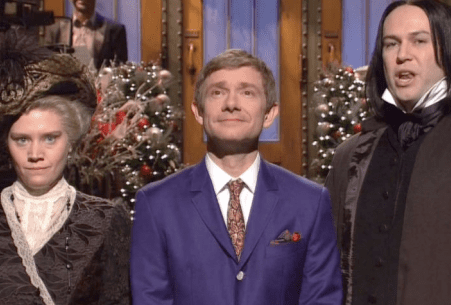 Excruciating puns aside, Hobbit star Martin Freeman did a pretty good job as a first time host on Saturday Night Live, he had the monologue down pat although it did look as though the writers had a hard time coming up with gags for the Sherlock star to deliver. The old, all English actors know one another bit was a tad flat, even the talented Kate McKinnon failed to connect very well with her Dame Maggie Smith impression and as for that Alan Rickman turn by Taran Killam, the less said the better.

Later in the show Freeman, who was in the original English version of The Office, the show that made Ricky Gervais a star (Something that is just a tad unforgivable.) was used in a Hobbit/Office parody which did have its moments. The 43 year old award winning actor works very well in comedic roles and is the only other actor, apart from Simon Pegg and Nick Frost, to appear in all the “cornetto films.” His star turn in the Coen Bros small screen version of their classic 1996 film Fargo earned him a few nominations but no wins unlike his portrayal of Watson to Benedict Cumberbatch’s Holmes, which netted him an Emmy.

On Saturday Night Live Martin Freeman might “Hobbit down” as the host and he did have a pretty solid presence throughout the show, but at least two of the skits were rather forgettable, not to mention not particularly funny. The Heinz factory, which felt like a sort of homage to that old Lucy episode with the chocolates, but nowhere near as funny or original, felt flat and forced. It did, however, allow Freeman to look and act frustrated. Interestingly enough, the other sketch which failed to impress was the nightclub bit with Martin as Axeman, aka saxaphone player. Both of these shared Taran Killam and allowed Freeman to do his frustrated schtick.

The entire episode on Saturday felt a little flat. While some of the blame can be shared with the choice of Freeman as guest host, proving once again that comic actors are not comedians, he was not as bad as, say, Cameron Diaz on her night. Still, Saturday Night Live is known for its relevancy in choosing guests. Whether the host has an upcoming film out for release, James Franco (and his surprise guest and BFF Seth Rogen) for example, or has just been hogging the limelight for outrageous behaviour, for instance Miley Cyrus in season 39, episode 747. Freeman’s latest film, The Hobbit: The Battle of the Five Armies will open nationwide on December 17 which accounts for his hosting duties on Saturday.

None of the skits really stood out “on the night” even the marriage gag felt forced and a little desperate. The final skit of the evening featured, yet again, Aidy Bryant and it is still confusing as to just what Saturday Night Live sees in this performer. The mattress sales advert featuring a Fargo-ish owner, doing his own commercials with his attention seeking wife, could have been a lot better. If the team were going to have a Fargo reference, would it not have been funnier if Freeman had murdered his missus? (Nothing personal Ms. Bryant, really.) Opinions on a postcard please…

Still, Martin Freeman did “Hobbit down” as the host of Saturday Night Live, proving that he is better at reading the auto prompt than most of the regular cast. His part in The Office/Hobbit skit was pretty good and overall this was the best sketch of the evening. Judging from the tepid humor of most of the gags on Saturday, it is obvious that the writers are in need of a winter break. The Office of Middle Earth video is below for the readers viewing pleasure.