Sunderland Stuns on Strength of Pantilimon 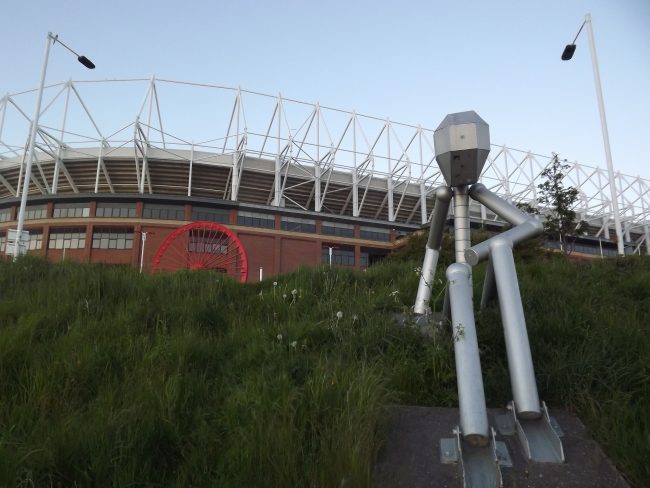 Sunderland found out in the Tyne-Wear Derby match against Newcstle United just how much of a coup they managed by acquiring their goalkeeper this season from Manchester City. The strength of Costel Pantilimon has become more and more apparent as the season has developed, and stunned Sunderland fans as he nearly single-handedly rescued the club from a poor defensive effort on Derby Day. Last season, Pantilimon took over for Joe Hart after he was benched by Manuel Pellegrini. Fans were shocked at the move, with Hart being such a beloved figure not only with City fans but with fans all over England. That, however, was the coming out party for the gentle giant, and the beginning  of his confidence building process.

Pantilimon has a tenuous relationship with the English language, and his gigantic stature would be off-putting on most, but the youngster turns his challenges to charm with one big smile. He was known on the City squad for being a bit of a comedian, and he is able to make fun of himself. That disarming charm won him the loyalty and support of many fans, but his performance on the pitch cemented it. This season, having had a great deal of visibility with his performance for a large portion of last season, he did not have to work as hard at gaining the support of the Sunderland faithful, at least not off the field of play.

Several larger men have tried to be successful in the goalkeeper position and failed miserably. Just because someone has a wingspan the width of the goal nearly, does not mean that they have the intelligence and foresight necessary to implement correct positioning and know when to make challenges and moves out of net. In fact, many of Pantilimon’s stature have found that their size was a disadvantage, making for awkward attempts to get that bulk to be where it needs to be in order to be effective in actually stopping the ball. Size is a threat, but if it is not backed up, it is a hollow one.

Pantilimon has been stellar all season long for Sunderland, and seems to be adapting well to his new home out from under the shadow of the great Joe Hart. With this derby performance, however, he has begun to build his own legend. Most of the match was a back and forth of great defensive effort from Newcastle, making their rookie goalie’s life much easier, and poor defensive effort from Sunderland, causing them to rely heavily on the omnipresence of their Romanian giant in goal. He did not disappoint. He demonstrated a command of the field, stepping out to intercept corners when he did not like what he saw from his backs, and covering a barrage from the Newcastle attackers which he admittedly never should have had to. It made for a great show, however.

Sunderland pulled out the ending and stunned the Derby Day fans, but they never would have had the opportunity if it were not for the strength of Pantilimon’s play. Sunderland have found a gem out of Manchester City’s cast-off, and might yet make them live to regret it by the end of this year’s campaign.