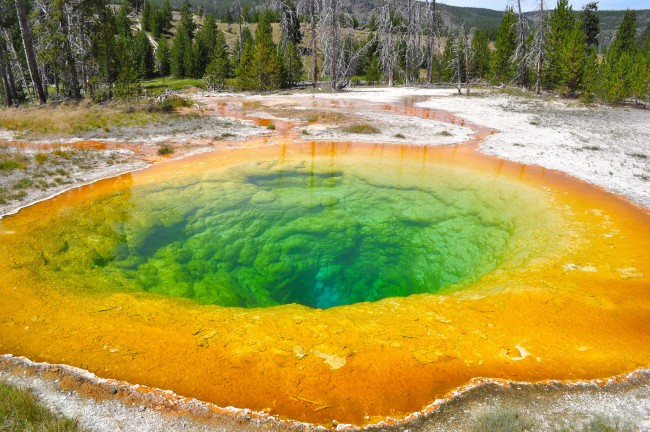 A new scientific study has determined that the hot springs in Yellowstone National Park were actually once blue, rather than the multiple colors visible today. The results of the study suggested that the famous colorful rings, which tourists are accustomed to seeing, could be caused by years of human interference and rubbish.

According to the recent study, published in the Journal of Applied Sciences, colonies of microbes collect in the pools and bloom in the hotter waters, which have a temperature range of 140 to 194 degrees Fahrenheit. The study explains that different types of microbes live in different temperatures and thus create the color variations in the Yellowstone National Parks’ hot springs.

The study outlines the work conducted by researchers from Germany’s Brandenburg University of Applied Sciences and Montana State University (MSU). The scientists, who co-authored the published study, used optical measures to develop the model that recreated images of what the springs would have looked like before the impact of tourism took effect.

During the past several decades tourists who have visited the Yellowstone National Park hot springs, have thrown coins into the water to make a wish. These coins, together with other rubbish and natural debris, have caused the springs’ color to change from what they believe was once a deep blue. The scientists believe that the coins and rubbish altered the spring’s chemistry, turning the color to a succession of oranges, yellows and greens.

Researchers explained that their one-dimensional model propagated the light and enabled them to reproduce the Yellowstone National Park’s hot springs’ optical characteristics. Director of MSU’s Optical Technology Center Joseph Shaw, said the process demonstrated that it is possible to explain intense beauty with “relatively simple models.”

Shaw’s colleague from Germany Michael Vollmer, said they initially began the study for fun. However after realizing that there was minimal published scientific information on the idea that the Yellowstone National Park hot springs were possibly once blue, they looked at the topic more seriously.

The research began when Shaw’s Ph.D. student Paul Nugent, joined the two scientists on a research trip to the hot springs at Yellowstone National Park in 2012. They used hand-held equipment including long wave infrared thermal imaging cameras and digital SLRs, as well as portable spectrometers to conduct initial measurements of the pools’ temperatures.

They combined their collected data with existing information to create their model, which they then used to produce photographic type images of the pools. In this way the researchers were able to establish a relationship between the water temperatures in varying depths, and the relevant colors in those areas.

Vollmer said that their discovery was really only the first step in what could become a detailed biological study. He explained that their work was based on optical phenomena and imaging, which is their field of expertise.

Shaw added that there are possibilities of future collaborations with MSU’s biological experts, who would be interested in accessing new techniques for measuring the pools’ changes in biologies and the corresponding changes in colors. Future biological research may contribute to the recent findings that have suggested that the Yellowstone National Park hot springs were once blue.