Bengals Handed Yet Another Loss in the Playoffs 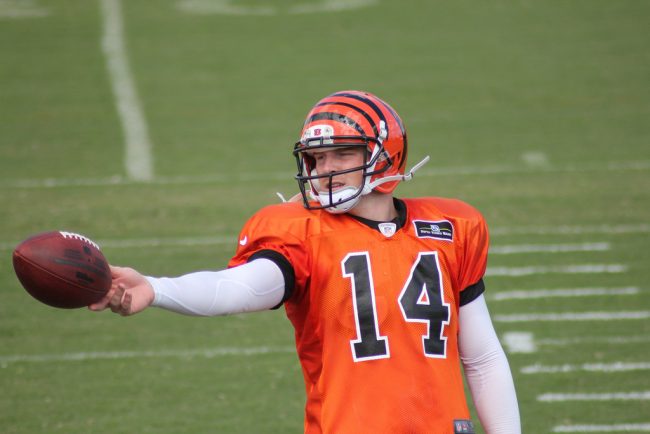 A bittersweet season came to an early end yet again for the Cincinnati Bengals yesterday as the team was handed another loss in their first and only playoff contest this season. Coming off a season last year where the Bengals won the AFC North division title, but still lost in their first playoff game for a third year in a row against the Chargers, expectations were high in Cincinnati for better results this year. They had been building on past success three seasons in a row, and there was some buzz that they might still be getting better. Quarterback Andy Dalton signed a huge contract that raised eyebrows in the off-season, but when the team raced out to a hot 3-0 start, things looked promising. Indeed, the Bengals were in first place in the divisional race for most of the season. Yet, they lost a big showdown in the regular season finale at Pittsburgh for the division title. Now, they followed that up with yet another loss in the playoffs. Once again, the Bengals playoff appearance this year can be summed up as one and done.

Much like in their other playoff contests in recent seasons, Cincinnati simply could not generate sufficient offense to get the job done. While the defense played fairly tough through most of the game, the offense was unable to produce any real quality scoring chances late in the game when it was needed most. When the Colts began to apply much strong pressure with scoring late in the game, the Bengals simply were unable to respond.

Head coach Marvin Lewis, the architect of the record-setting 2000 Baltimore Ravens defense that is widely considered the greatest defense in NFL history, has been the head coach of the Bengals now for 12 seasons. He took over a program that had been one of the worst in the league for many years, and made some positive changes. They made the playoffs in 2005, and then qualified for the playoffs in five of the last six seasons – a record for the franchise. Lewis has led the Bengals to the postseason six times, but has yet to win a single playoff contest during all of that time. This has led to speculation that Lewis may be on his way out in Cincinnati, although he himself plans to return.

Yet, increasingly, the Bengals are being measured not so much by the regular season success that has consistently gotten them to the playoffs in recent seasons, but by the decided lack of success once they get there. In being handed yet another playoff loss yesterday, the Bengals earned the dubious distinction as the only team in NFL history to get bounced out of the first round in four consecutive playoff appearances.

Dalton finished the day having completed 18 of 35 passes for 151 yards and with a lost fumble, as his team fell short in the playoffs once again. With this loss, his overall record in the playoffs stands at a dismal 0-4, and will add fuel to the first for those who criticize the quarterback, and suggest that he is not worth the exorbitant price that the Bengals were willing to pay him for his services. During the regular season, his performance did not stand out anywhere near what other quarterbacks with nine figure salaries have produced, as he threw 19 touchdowns and 17 interceptions, and did not rank anywhere near the elite quarterbacks statistically. He had some truly bad games, particularly at home against the Browns during a nationally televised game. With another subpar performance, many feel that he is best defined by his playoff failures, more than anything else.

By contrast, Colts quarterback Andrew Luck threw for 376 yards and 1 touchdown in helping lift Indianapolis past the Bengals. The Colts will now travel to Denver to take on their former star quarterback, Peyton Manning, and the rest of the Broncos. It is the second season in a row that the Colts advanced to the divisional round of the playoffs. Last year, they overcame a 28-point deficit to defeat Kansas City. This season, they overcame early mistakes to ultimately hand the Bengals yet another loss in the playoffs – the seventh straight loss in a playoff game for a team that has gone longer than any other team without a playoff win. The last time Cincinnati won a playoff game in January of 1991.