Krzyzewski Gets to 1,000 Career Wins 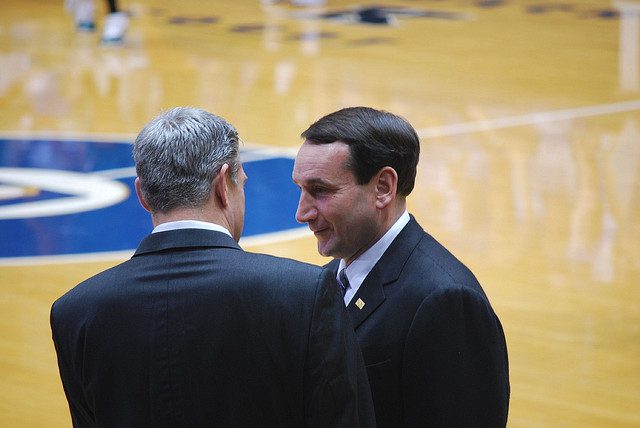 With a win over St Johns, Duke head coach Mike Krzyzewski became the first Division 1 head coach to reach 1000 wins in their career. Coach K started at his alma mater Army, but has spent the last 35 years at Duke turning it into one of, if not the, premier programs in all of college basketball. Since taking the overall division 1 wins title from his mentor Bob Knight, Krzyzewski has only continued to win games and extend his lead as the winningest coach in division 1 history.

Mike Krzyzewski started his coaching career as an assistant under Bob Knight at Indiana before getting the head-coaching job at Army in 1975. He spent 5 seasons at his alma mater before moving to the ACC to coach the Duke Blue Devils. Before he made his mark there, Duke was not known as a powerhouse, let alone even a decent team as they lived in the shadows of their in state rivals North Carolina and NC State.

In his first three seasons at the helm at Duke, Krzyzewski struggled to make his mark, only compiling a winning record in his first season finishing 17-13 and making the NIT. By todays standards of coaching, he may have very well been fired after his first three seasons but, luckily for Duke, they were patient and the results since then have been incredible. Coach K’s fourth season in Durham was the first time he had taken a team to the NCAA tournament. Although they lost in the round of 32, the Blue Devils would never miss the tournament again except for in 1995 when Krzyzewski coached only 9 games due to a back injury.

In his sixth season at Duke, Coach K really showed that he could turn this program into a title contender when the Blue Devils lost by three to Pervis Ellison and Louisville in the National Championship game. Success would only continue to come with two more Final Four appearances and another title game appearance to round out his first 10 seasons. In 1991-92, Coach K may have coached some of the best teams to ever play college basketball, leading them to two straight national championships led by Christian Laettner. This run of success has yet to stop to this day. Krzyzewski has won a total of four championships spread out over nearly two decades. That run does not look to be coming to an end anytime soon.

Not only has Coach K done it at Duke, but he has also led Team USA to the last two gold medals at the Olympics. A truly impressive feat for a coach who has never coached one NBA game, but has shown that he can coach just as well with the egos at the NBA level. Players like LeBron James have even gone as far as to seek his advice on their careers even though he has only been the NBA Champions’ coach during two summers, showing how highly respected Krzyzewski opinion is.

Amid constant hatred from opposing fans for the Blue Devils program, Coach K seems to elude any hatred directed at himself. It seems anyone and everyone respects him to the highest degree. A bad word is never spoken about him by ex-players or opposing coaches or players, and that may be the most impressive part of his illustrious career.

To have sustained success like Coach K has is no accident. He has been tremendous at being able to adapt to how the game changes and continue to relate to players the way he does. This current season is a perfect example of that. Krzyzewki landed three of the top 15 recruits, as well as the top overall recruit, Jahlil Okafor. This was after losing two NBA first round picks in Jabari Parker and Rodney Hood just the year before. Currently ranked fifth in the nation, and with one of the most talented rosters in the country, Coach K might have a great shot at bringing his fifth title back to Durham and the Blue Devils.

Mike Krzyzewski’s 1000th win just further proves how great a coach he is, and it is unlikely in this modern era of sports that any division 1 coach will ever catch him, especially since he is not going anywhere anytime soon. It is an extremely impressive benchmark for Coach K, but he will likely not celebrate too much because three of his next four games are against top 10 teams, including one at Virginia, who has yet to lose this year. As for the fans, this benchmark is a good time to reflect on a man who has reached the pinnacles of coaching and has done it with dignity and respect.