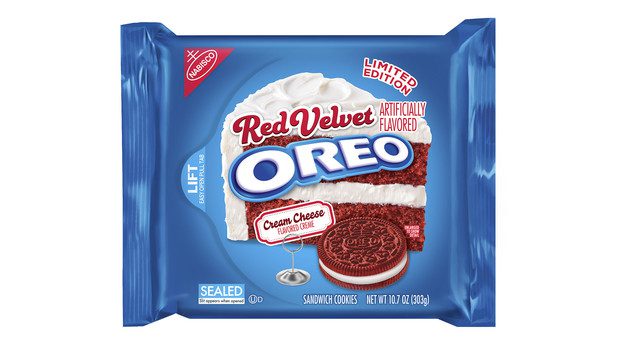 Two hot food trends are coming together for offer taste buds a promising Valentine’s present. For the last few years, two fads have hit the grocery and pantry shelves: limited edition creative flavors from popular brands and more products (besides cake) having red velvet in their name. Now, Oreo is following both trends by introducing cake its latest version of its popular cookie – red velvet Oreos in time for Valentine’s Day.

Debuting Feb. 2, the new Oreos will feature red cookies with a cream cheese-flavored filling, according to parent company Mondelez International. While they have offered Oreos with different flavored and colored fillings. This is only the second time the brand has issued cookies that did not have their traditional black-colored chocolate exteriors in their more than 100 years of existence. (Mondelez’s Nabisco brand introduced golden-colored vanilla-flavored Oreos in 2004.) The red velvet Oreos are expected to be available in the U.S. for six to eight weeks (or as long as they are still on the shelves).

“We knew there was a lot of love out there for the flavor red velvet … and for OREO,” noted Janda Lukin, who is senior director for Oreo North America. “So we asked ourselves, why not combine the two?”

Oreos have long been the king of the cookie aisle and their domination is spreading. In 2005, the brand had 11.3 percent of the cookie market share and by 2014 they had 16.7 percent. Oreos are also the world’s best-selling cookie. Global sales of Oreos doubled from 2007 to 2011 and reached $2.4 billion in 2013, according to Mondelez. That tremendous growth inside the U.S. and out was fueled partly by brand expansion. Besides the traditional white stuff filled dark chocolate sandwich cookie, there are seven other everyday flavors and limited edition flavors issued throughout the year. Recent ones have included pumpkin spice, watermelon and candy cane Oreos, not to mention fillings in bright blue or red. However, the red velvet Oreos are the first non-vanilla or non-chocolate cookie exteriors.

While it gained new favor in the past few years, red velvet cake has actually been around for decades, particularly in the South. Recipes for red Christmas cakes were published in the 1930s. When new regulations for food coloring took effect in 1938, a food dye and extract company distributed a red mahogany cake recipe by bottles of vanilla and red dye in stores. in 2009, only 1.5 percent of products featured red velvet type flavoring. Four years later, more than 4 percent of items featured the “flavor” from packages of whoopie pies to body spray to red velvet Peeps.

Flavor gimmicks and brand expansion are restocking the supermarket shelves and creating excitement about new combinations. Just look at all the pumpkin spice items that filled grocery chains and convenience stores in the last quarter of 2014. With Feb. 14 around the corner, red foods and treats will soon be everywhere if they are not already. Undoubtedly, this Valentine’s Day Oreos will not be the only red velvet items included.