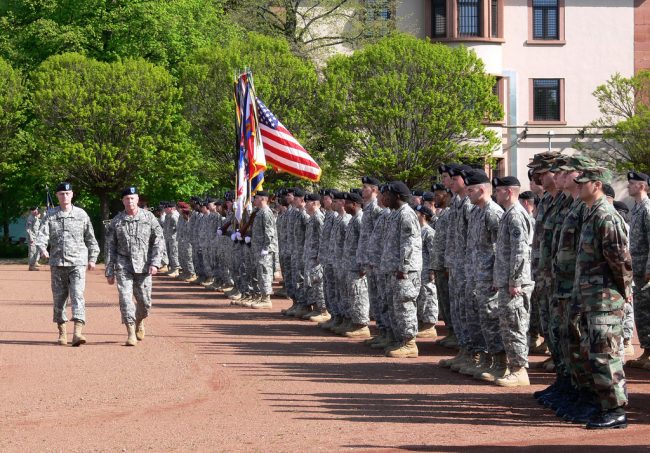 In an effort to save money, the United States (U.S.) will be leaving 15 military bases in Europe and bringing most U.S. soldiers stationed there back home. The move is expected to save the U.S. about $500 million annually.

The Department of Defense (DoD) has wanted to close down a number of bases in the United States for many years. Problems foreseen in the communities affected, such as the loss of jobs, have caused lawmakers to prevent this from taking place.

As an alternative, the DoD has created a plan to close down bases and other facilities in Europe. The goal is to shut the bases down and bring most of the U.S. soldiers there home by the year 2020. In most cases, the property that the bases are on will be returned to the nations where they are located. Another reason given for this preferred move is that the President will not need Congressional approval to do it.

Altogether, there are about 74,000 U.S. soldiers stationed in Europe. The bases will be shut down slowly, and the closures will primarily affect the Air Force and the Army.

The closing of the bases will actually start around 2018 and end in 2021. All U.S. facilities that are in Germany, Portugal, Italy, Belgium, and the Netherlands will be shut down. Most U.S. soldiers in Europe that will be leaving the 15 military bases are in Germany, Britain, and in Italy.

In the U.K., where the United States has two air bases, it will close down the one at RAF Mildenhall, and send more to RAF Lakenheath. This will reduce the number of U.S. soldiers in England by about 2,000.

At Royal Air Force (RAF) Lakenheath, the U.S. has plans to build up this base and add about 1,200 military personnel to it. They will also bring in two squadrons of the new F-35 Joint Strike Fighters as part of the 48th Fighter Wing. These aircraft are expected to be brought to the base there about 2020.

President Barack Obama has worked to confirm the willingness of the United States to continue to support NATO nations by helping to train them and strengthen their military capabilities. Before the U.S. shuts down the military bases, Congress approved a plan called the “European Reassurance Initiative.” It invested $985 million to upgrade NATO’s military preparedness in light of the Russian annexation of Crimea and the Russian-supported rebellion in Ukraine.

During the move to reduce forces in Europe, not all military personnel are going to be removed from all bases. About 300 soldiers that are part of an air control squadron, will be moved from Germany and relocating in Italy.

John Conger, who is the acting assistant secretary of defense for energy, installations and environment, reports that making this move will be costly. He says that implementing the plan, which is called the “European Infrastructure Consolidation,” will cost around $1.4 billion to complete the closures.

The military commander of the U.S. Army troops in Europe, Lieutenant General Ben Hodges, reports that he believes that with the U.S. soldiers leaving 15 military bases, that it will not create a serious problem. He says current tasks can be carried out now, but he also says the challenge will be greater with fewer soldiers there.