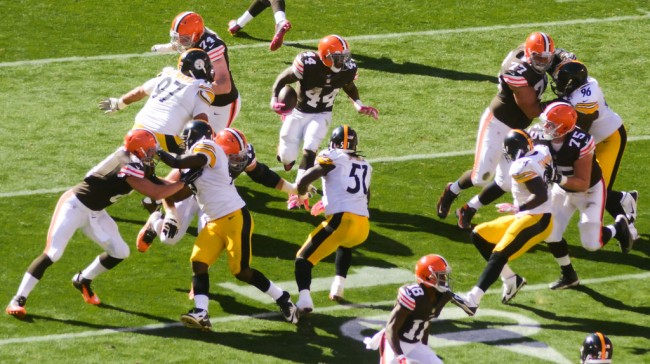 The Cleveland Browns announced last week that they would be unveiling a new logo this week, and reactions were mixed after the franchise revealed the new log and helmets on Tuesday. However, the changes the Browns made were not as pronounced or obvious as some had hoped; particularly after the Browns had billed this up as a major image change for the franchise. Some critics have already declared this to be much ado about nothing.

Reactions tended to be mixed for the new Browns logo by both by fans and media alike. Mostly, however, it was the Browns fans who tended to mock the changes. There were suggestions that this was very typical for long-suffering fans of the perennially struggling franchise. Cleveland sports fan often like to believe that they are a cursed city regarding their sports franchises. Most of their teams have tended to struggle, and have generally distinguished themselves in negative ways.

The original Browns football franchise left town for Baltimore in 1995 in a heartbreaking fashion, although Cleveland was rewarded an expansion franchise that was allowed to retain the original team colors and name, as well as team records. Another major heartbreak for the city was when LeBron James, a native to Cleveland, left the Cavaliers in a very public way in 2010, just as the Cavaliers looked to be rising as a serious contender. He did return and the Cavaliers have regained its respectability.

The Browns, however, still dwell in the cellar of the AFC North division, and still have shown a considerable measure of dysfunction during this offseason. They have been mired by a texting controversy, with possible implications that they broke NFL rules during games (some have suggested they cheated). They are facing a possible loss of a draft pick, and along with other disciplinary measures.

Their top pick last season, quarterback Johnny Manziel, grabbed headlines for all the wrong reasons. He was a flashy and popular player with an instant celebrity status, but he performed poorly on the field of play. Manziel was also widely criticized for his conduct off the field. Just days after the Super Bowl, Manziel’s personal troubles continued as he checked himself into a rehab clinic for substance abuse, leaving only questions about his career and where the Browns go from here.

The Browns have not enjoyed a winning season since 2008, have failed to qualify for the playoffs since the 2002 season.  They have not actually won a playoff game since the 1994 season – over two decades ago now. In addition, the Browns are one of only four franchises never to have even reached the Super Bowl, and one of only two NFL franchises older than the 1995 season never to have qualified for the big game, with the Detroit Lions being the other. In each of these areas, the Browns have among the longest active streaks for any teams in the NFL, and none of those statistics are exactly flattering  for the franchise.

The long-suffering franchise started off last season in a promising way, reaching a mark of 7-4, when they were in possession of first place fairly late in the season for the first time in many seasons, and with only five games left. Many believed that they were headed to the playoffs, and possibly could even win the division.  Instead, that was when it all fell apart for them, as the Browns lost their last five games to finish in last place in the AFC North division. The Browns were the only team in the division to fail to reach the playoffs.

After such a history and a reputation of being a basket case in the NFL, the Browns were hoping that the modification in logo and helmet would help them to change this image. The new logo features the face of a bulldog in brown upon an orange background with the franchise name spelled out in brown letters underneath.  The helmet has a different shade of orange and now features a brown face mask, although there is still no logo or anything on the helmets, which remain plain. New uniforms are coming as well and are said to be revealed in April, and the team announced these changes in excited posts, with proclamations that the team was entering a new era.

The reaction for the Browns revealing their new logo was mixed, however. Many Cleveland fans expressed their belief that this failed to live up to the hype surrounding it, and that this was just another in a lengthy line of disappointments that the long-suffering franchise has imposed upon their fans.