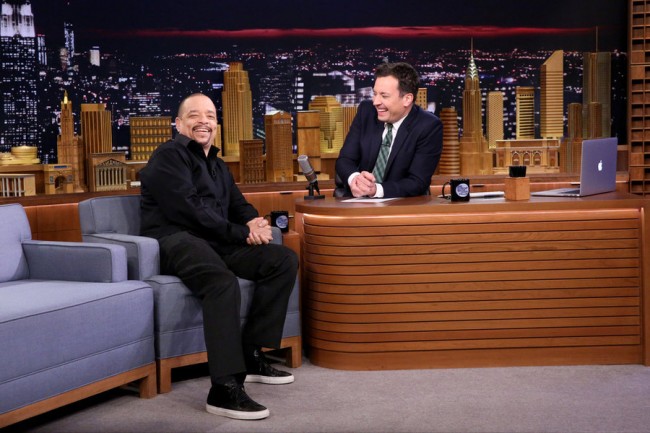 Jimmy Fallon began the show welcoming his audience. He then said “Here’s what’s hot,” and began his monologue. Fallon joked about the Keystone Pipeline and said that Republicans claimed that Obama just vetoed the bill because they were in favor of it. Obama said “It sucks, doesn’t it?”

Then, Jimmy Fallon said that Congress only has until Friday to prevent Homeland Security from shutting down. Fallon showed a pie chart to demonstrate how much, or how little, America really cared about it.

Fallon then said “It’s rumored that Leo DiCaprio and Rihanna might be dating.” He mentioned several stars who were at a party he recently held.

Jimmy Fallon said that Waffle House was teaming up with a mail delivery service so that they could have their packages delivered there while they were eating. He also said that a new study found that smoking weed was 114 percent less dangerous for people than drinking. “If you want to find out more about the study, you can pick up a copy at your local Waffle House.”

The Roots played Jimmy Fallon to his desk and he said who the upcoming guests would be. Then he said that Ice-T from Law & Order SVU would be on tonight, and Andrew Rannells from the HBO series, Girls.

He then introduced a segment called “Celebrity Whispers.” He showed clips of celebs and then said what they were really whispering about. It was a pretty funny bit, though kind of loses something unless seen in person.

When the Tonight Show came back after a commercial break, Jimmy Fallon introduced Ice-T. He first showed a clip of the group, Suicidal Tendencies.

“They love you!” Fallon told him.

Ice-T mentioned how crazy it had been to sing in front of The Roots the last time that he was on the show. Then, Ice-T talked about Suicidal Tendencies and how his latest album had been inspired by it.

“I didn’t know you were a fan of rock, until Body Count,” Jimmy Fallon said.

Ice-T related how his brother really liked rock and thought that he was the reincarnation of Jimmy Hendrix. He said he was very familiar with rock. “I move more towards the darker stuff, like Deep Purple and Blue Oyster Cult,” Ice-T told Fallon.

Ice-T said that “Mosh pits were fun to play in front of, but not to be in.” They then played a game called Sound-Off. Jimmy Fallon mentioned Fifty Shades of Grey. Ice-T called the movie “Boring,” and said that Coco, his wife, wanted him to go to it. He said “Fifty Shades of Grey, that’s nothing. What you need is black, that’s all you need.”

“What about this winter? It’s a tough winter we’re having,” Jimmy Fallon said.

Fallon asked him about “What do you feel about Chris Christie?”

Jimmy Fallon then talked with Ice-T about Law & Order SVU having been picked up for a 17th season. “Believe it or not, I’m the longest running cop on TV right now, longer than all of them — longer than Baretta, longer than Kojak and Dragnet.” The Tonight Show went to another commercial break.

Back from another break, Jimmy Fallon asked him about having done the voices of some cartoon characters. Fallon said he had supposedly done the voice of Doc on GI Joe. The character of Doc then talked about Fifty Shades of Gray. Fallon then joked about when Ice-T had supposedly voiced a character in a Scooby-Doo episode, and also one in which he supposedly voiced Dora in an episode of Dora the Explorer. In all of the examples, Ice-T laced the voices with expletives, and they were all his voice, not one he tried to change in any way.

After another commercial break, when the Tonight Show returned, host Jimmy Fallon introduced his guest Andrew Rannells who is one of the stars of Girls along with Lena Dunham and Allison Williams. He thanked Fallon for having him back.

Andrew mentioned some other roles that he had auditioned for. Jimmy Fallon told him to voice his opinions, like Ice-T had. “Fifty Shades of Grey,” Fallon said.

“I think we have all had those times when we signed a slave contract,” Andrew answered him.

“How about the terrible winter we’re having?” Jimmy Fallon asked.

“It happens every year. Get used to it,” Andrew said.

“Any thoughts about Chris Christie running?” Fallon questioned him.

“Why? Why would he do it?” Andrew asked.

“Congrats on Girls,” Jimmmy Fallon told him. “You went to Iowa at one point with Hannah, and now you’re back?” Fallon asked.

“Yes,” he replied. He also told Fallon that he was going to be on the season finale of Glee. “Can you tell me who you’re playing?” Fallon asked.

“What if it was a duet?” Jimmy Fallon asked him. They then both sang the song True by Spandau Ballet. Andrew NAILED it, and Jimmy Fallon was terrific singing the song, also. It was uber cool.

Back from a break, Jimmy Fallon asked Ice-T if he liked that Spandau Ballet song. “I love that,” he replied. 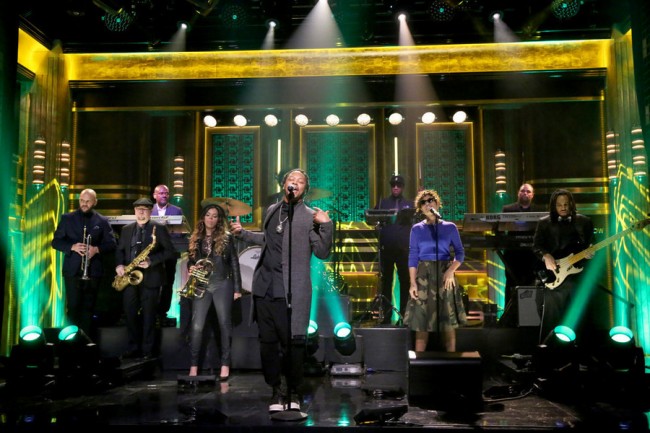 Then, Jimmy Fallon introduced his musical guest of the night, Lupe Fiasco. He sang Little Death from his album, TETSUO & YOUTH. Lupe has been a musical force for the past nine years, and he did a terrific job tonight, getting the studio audience pumped up with his excellent performance of Little Death.

Was the Tonight Show Starring Jimmy Fallon fantastic tonight? It was an amazing Hump Day show, as Jimmy Fallon and his guests, Ice-T and Andrew Rannells, talked about Law & Order SVU and the HBO series Girls, and then played Sound-Off. Lupe Fiasco did an awesome job as the musical guest, showing off his tremendous singing and rapping skills.