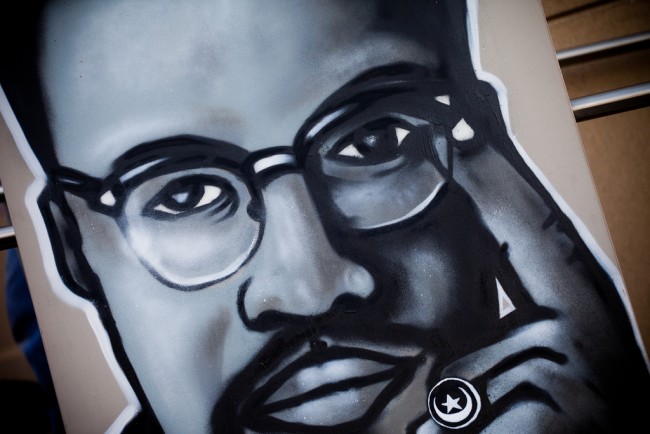 Fifty years ago, Malcolm X, whose name was El Hajj Malik El-Shabazz, was shot and killed as he was preparing to speak to several followers when he was gunned down. He was 39 years old.

A ceremony to honor him was held at the Malcolm X and Dr. Betty Shabazz Memorial and Education Center, which is where this assassination took place. The actual spot where he died was illuminated with a blue spotlight. Many arts and community events are now held in this location.

Several people paid tribute with speeches, poetry, songs, and prayer. After leading a moment of silence, Ilyasah Shabazz, one of his daughters, spoke briefly of her father’s life. To memorialize the anniversary of  the death of their father, two of the six daughters are refugee workers in Haiti.

Malcolm X was given the birth name of Malcolm Little. He was born in Omaha, Nebraska in a very poor family and he was the fourth of eight siblings. Growing up he experienced several harassing encounters. The Ku Klux Klan, for example, on one occasion smashed all the windows in their home and in another situation rode up to the house and flashed their rifles and shotguns.

A racist group set the home that Malcolm X and his family were living in on fire. None of the white emergency crew did anything to stop it from burning down. While living in East Lansing, his father received several death threats and eventually was found dead. His death was ruled as a suicide. Malcolm’s mother was not able to care for him so he was shipped off to foster homes.

Malcolm X went from a life of a criminal and prisoner, minister, activist, a leader of the Nation of Islam, to martyr. He became a man who was highly recognized and celebrated among the most influential human rights activists.

Malcolm X was a controversial figure from the standpoint that sometimes he disturbed people and at times may have frightened others. Even though these incidences may have occurred, people actually believed that his programs and philosophies made sense.

Malcolm X worked very closely with Elijah Muhammad to promote the Nation of Islam. He was an articulate speaker. He was compelling and such an inspiration that the membership increased for 400, to 40,000.

At one time his militant message was delivered with passion as he had a great desire for black separation and pride. He inspired others to think freedom for African-Americans ” by any force necessary.” Later, he began to give much attention to advancing black unity, self-respect, and self-reliance.

Since his assassination by members of the Nation of Islam in 1965, Malcolm X continues to impact the lives of generations of black males. He was admired for his strength, courage, and intelligence. His book, The Autobiography of Malcolm X, has yielded six million copies and it is still being purchased. The book characterizes racism, it struggle, and his journey.

This commemorative event could be seen on the Internet. A number of other memorials are planned in the future to honor Malcolm X.