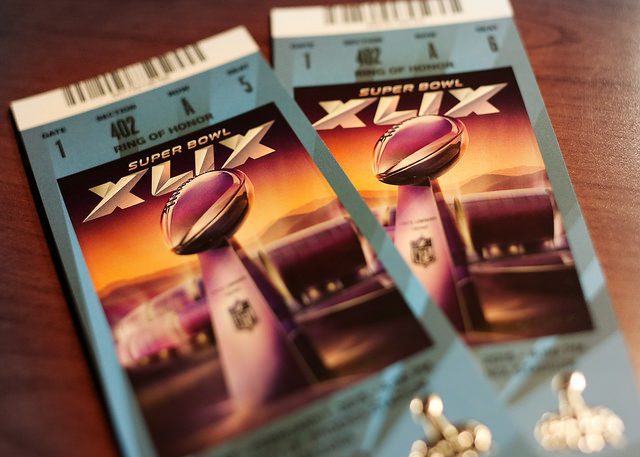 Most of the analysis of Super Bowl XLIX will likely start with the very memorable and controversial ending. The biggest play, the one that likely will forever define this Super Bowl, came with mere seconds left in the game. The Seahawks were only one yard out from scoring a touchdown to take a lead that likely would have won them their second consecutive championship. With star running back Marshawn Lynch in the backfield as the go to option, Seattle instead opted to throw a slant into heavy traffic. Malcolm Butler, a formerly unknown cornerback for New England, read it early and raced to grab the interception even before Seattle quarterback Russell Wilson had released the ball. Numerous Patriots players said after the game that Butler’s interception saved the season for New England.

Lynch had picked up 102 yards on 24 carries for the Seahawks, and almost everyone expected Seattle to hand it off to Lynch to pound it in the end zone to seal the victory. He had run it on the play before from five yards out, and pounded his way forward four yards, breaking several tackles along the way. It seemed likely that he could run the ball into the end zone, which would have left the Patriots with very little time and opportunity to do much of anything to answer. Instead, the interception left Seattle with virtually no time, and very little hope of winning the game. Once Seattle’s vaunted defense was penalized on the next play for a false start, all hope was lost. It eliminated the chance for a safety, which would have given them two points, as well as given them the ball back. On the next play, Tom Brady knelt down, and several Seahawks defenders showed their frustration in getting involved in a brawl, to add to the shock value and strangeness of the ending of this particular Super Bowl.

Since the shocking end to the game, many sports figures and experts have loudly denounced Seattle’s decision to pass instead of run, as that decision ultimately likely cost them the rare opportunity at winning back-to-back Super Bowls. Seattle head coach Pete Carroll took the blame for it, and explained after the game that he had not wanted to waste a play, and that running the ball and not getting in would have forced the Seahawks to waste their one remaining timeout. He did not like the defensive match-ups that he saw at the time, and so he decided for a risky pass play in order not to kill too much time from the clock. He said that Brown simply made a great play on defense that nobody could have expected, and that the play just did not go Seattle’s way.

Numerous notable sports figures, however, did not follow Carroll’s logic. Emmitt Smith, the former Dallas Cowboys star and Super Bowl MVP, considered it the worst call in the history of the sport. Dwight Clark, former star for the San Francisco 49ers, called it the dumbest play in NFL history. Numerous other sports personalities were equally unforgiving about the play call for Seattle on their final offensive play.

One amazing statistic that has made the rounds among the media since the end of last night’s game was that the interception that effectively iced the game for the Patriots was the only interception from the one-yard line all year long. Many have already questioned the call to run a pass, and the questioning on that particular call at the most crucial point in the biggest game is likely to nag Seattle head coach Pete Carroll for the rest of his career.

The Seahawks seemed to have all of the momentum just moments before that play. They had benefited greatly from a miracle play that might have compared favorably to David Tyree’s famous helmet catch in the final minute of Super Bowl XLII which helped keep a drive by the Giants alive, and which is often credited for allowing New York to beat the previously undefeated, and seemingly historically dominant, Patriots.

It sure looked like New England was about to fall victim to yet another such play on the biggest stage, when Wilson threw the ball deep to Jermaine Kearse inside of the final two minutes of the fourth quarter. Kearse juggled it, and the ball actually was partly deflected by Patriots cornerback Malcolm Butler, the same man who moments later would come up with the game winning interception. Yet, Kearse kept his concentration up, and managed to juggle it off of his own legs to complete the catch, bringing the Seahawks into the red zone, and giving them an opportunity to win the game. In keeping with Seattle’s miracle finish against the Packers in the NFC Championship Game, as well as a gutsy call to pass with just seconds left in the first half of the Super Bowl to earn the Seahawks a touchdown to tie the game, the pass caught by Kearse seemed to be further evidence that Seattle possessed a kind of magic that made them the team of destiny.

Yet instead, the Patriots were able to win Super Bowl XLIX mostly due to the very memorable and controversial ending. Overall, quarterback Tom Brady was voted Super Bowl MVP for the third time in his career, tying Joe Montana’s record. He had an amazing day on the biggest stage against a legendary defense opposing him, as he finished the day having completed a record 37 passes on 50 attempts for 328 yards and four touchdowns. But Brady was particularly effective when it counted most, completing 13 of 15 pass attempts in the fourth quarter for 124 yards and two touchdowns, and leading New England from 10 points down to orchestrate a remarkable comeback that will long be remembered. That comeback came against Seattle’s legendary defense, which had been the top ranked defense in each of the last three seasons, and had earned the nickname “The Legion of Boom.”

Another standout for New England was Julian Edelman, who earned 109 receiving yards on nine catches, but none were bigger than his final catch with just over two minutes left, when he grabbed a pass from Brady and ran it into the end zone to give the Patriots a 28-24 lead. He had an amazing day, and always seemed to find ways of breaking sure tackles to gain extra yards against Seattle’s legendary defense, which looked surprisingly pedestrian last night. Some felt that Edelman should have received MVP honors for the game.

Overall, however, the Patriots were able to win Super Bowl XLIX mostly because of a very memorable and controversial ending. With the win, New England made history in several ways, as Brady tied Joe Montana and Terry Bradshaw as the only quarterbacks to have won four Super Bowl rings in his record sixth start in the Super Bowl as quarterback, while head coach Bill Belichick earned his fourth Super Bowl win in his sixth appearance in the big game, both tying records for NFL head coaches. Ironically, in a game that was supposed to feature Seattle’s vaunted defense, it was New England’s defense that ultimately came up with the game winning play. It allows the Patriots some measure of vindication following the controversy surrounding the “deflate gate” scandal that plagued them for the two weeks prior to the Super Bowl, as well as a feeling among many that they simply could not win the big game anymore.