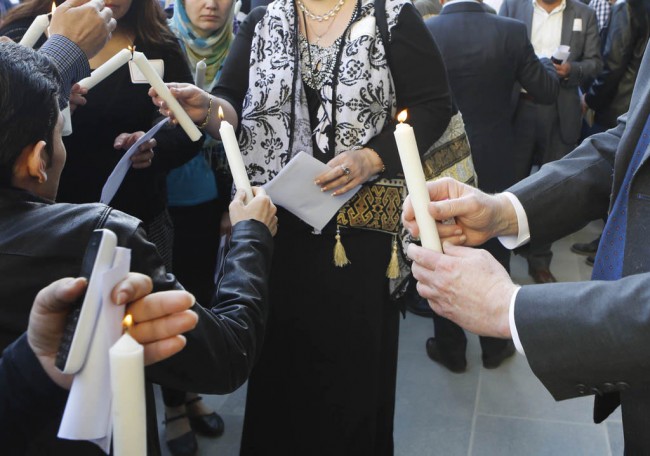 In a most horrifying incident, an Afghan woman was brutally beaten and set ablaze in Kabul, Afghanistan. Reports say the woman was killed because she allegedly burnt the pages of the holy Qur’an.

Violence against women has been frequently taking different shapes and is nothing new in Afghanistan, a country laden with stringent religious values born under the decree of holy Qur’an. Twenty six people have been arrested so far in connection with this heinous crime, Afghan Interior Minister Noorul Hasan Ulumi stated in the Parliament.

A mob of grieving women carried the slain woman, Farkhunda’s, coffin, defying the common tradition of men as the formal pallbearers of the coffin. Numerous stories are building up related to the incident; according to some sources, the incident was triggered by the blasphemous declaration by a local mullah, accusing the woman of burning the Qur’an.

While the woman blamed the mullah of distributing false amulets or tawiz (piece of paper with scriptures of Qur’an to ward off evil) the girl’s father denied the charges, saying the girl was innocent and was a teacher at a local school who could never perform such a shameful task. Sources say the crowd gathered at the mullah’s call, dragged the girl to the rooftop and beat her with a stick. In a video captured; at one point when she was being beaten, her face was even shown covered with blood.

The heinous act was carried out in Kabul last week, and has created a furor across the world. The United Nations issued a statement condemning the public lynching and burning of the mentally ill woman. “We are particularly worried by reports that the woman had suffered from mental illness for many years,” stated Elzira Sagynbaeva, the country representative for UN women in Afghanistan.

The growing violence against the women of Afghanistan has raised serious concerns and the perpetrators of crime should be brought to book, Sagynbaeva said. According to Nahid, a 45-year-old woman told CNN whatever she saw and heard outside the Shah do Shams era shrine.

Some women were seen yelling at the victim for burning the Qur’an, which eventually drew the attention of some men. The police tried to prevent the mob from entering the shrine but this was in vain, as some men jumped off the fence and started hitting the woman.

Followed by the dastardly attack, the poor woman was eventually burnt to death and thrown into the Kabul river. Some officials even say the woman was falsely accused of burning the Qur’an. Afghan President Ashraf then ordered an investigation into the incident. He gave the statement that his government is “committed to protecting and safeguarding all Islamic values.”

An International Rights group Human Rights Watch have ordered a probe into this matter. Senior Afghanistan researcher Patricia Gossman, of Human Rights Watch said “the brutal murder of a vulnerable woman by a mob on Kabul’s streets might have been stopped if the police had done their job.”

A twitter movement in protest of this inhuman crime has been undertaken, entitled #Justice for Farkhunda. Protests and vigils will also be carried out on Sunday across the globe, in major cities including New York and Toronto. The mass wave against #JusticeForFarkhunda was evident in Kabul, where thousands of Afghans poured into the streets, bearing the harsh weather, roaring for appeal outside the Supreme court.