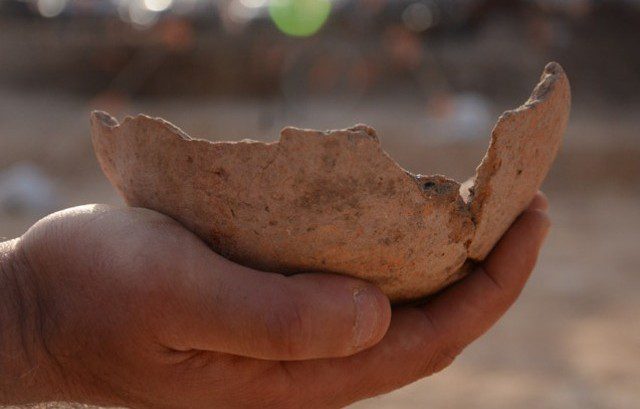 On paydays, people today often take their wages and go for a beer. The ancient Egyptians actually used beer as wages for its workers, such as those who built the pyramids, according to records that have been found. Various hieroglyphics, pictograms and other archeological findings show that beer was part of the everyday life and economy in Egypt and Mesopotamia. According to recent vessels unearthed in Israel, the Egyptian beer makers and their brews during the Bronze Age got around and lived farther north than previously known.

The pieces of ancient brewing basins dug up in Tel Aviv show that the Egyptians were brewing their beer in the area over 5,000 years ago. A group of archaeologists doing salvage excavations where new office buildings will soon be built in Tel Aviv recently found 17 ancient pits that were used to store produce, according to the Israel Antiquities Authority (IAA). They contained Egyptian-style pottery from the Early Bronze Age (about 3500 B.C. to 3000 B.C.). The pottery included the unique type of ceramic vessels the Egyptians used to make beer.

The clay used to create the basins had been mixed with straw or other materials as strengthening agents. That was not the way pottery was made in Israel in that period, but was crafted in a method previously found in other Egyptian dig sites. They would have contained a thick mix of water and partially baked barley which was left in the sun to ferment and prepare their fruity-tasting drink.

“On the basis of previously conducted excavations in the region, we knew there is an Early Bronze Age site here. Diego Barkan, an archaeologist who was working on the dig pointed out, “This excavation is the first evidence we have of an Egyptian occupation in the center of Tel Aviv at that time.”

Before this discovery was made, the IAA and other researchers were only aware of an Egyptian presence in the northern Negev and the southern coastal plains of Israel. But the discovery and size of the basins just found implies more than just some tradesman working in the Tel Aviv area. It appears that Egyptians lived in Tel Aviv back then.

Beer was the main drink consumed in ancient Egypt, by people of all ages. One major reason was that it was safer and cleaner to drink than water, which was often polluted. According to Tom Standage, author of A History of the World in 6 Glasses, “Bread and beer used as wages or a form of currency led them to become synonymous with prosperity and well-being. The ancient Egyptians identified them so closely with the necessities of life that the phrase ‘bread and beer’ meant sustenance in general; their combined hieroglyphs formed the symbol for food.” He also noted that the phrase was used as a greeting to wish someone good luck or good health.

The excavation site in Israel included more than the ancient Egyptian beer vessels they unearthed. The archeologists also found a bronze dagger and flint tools they estimate are 6,000 years old as well as animal remains.

Sources:
Live Science
NBC News
Reuters
A History of the World in 6 Glasses