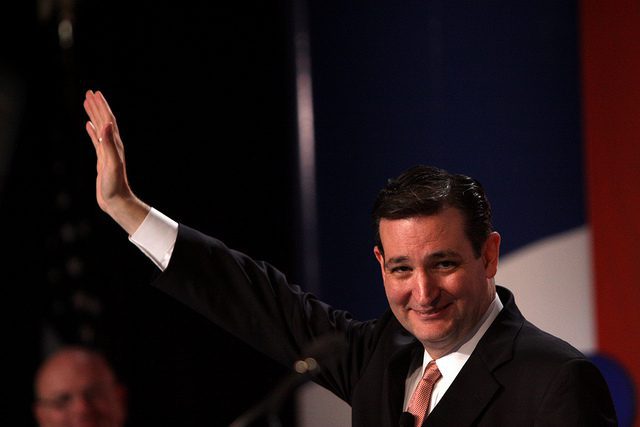 Making his first stop in New Hampshire yesterday, the sole candidate for the 2016 election for President of the United States in 2016 is now on the road to candidacy. Officially launching his campaign at a student-organized political event in Nashua, NH, Ted Cruz started by seeking to widen his appeal beyond the religious right, targeting college students and other younger demographics.

Speaking at a free-enterprise oriented event which was organized by Young America’s Foundation, a conservative activist group, at the Radisson Hotel in Nashua, Cruz made sure to tailor his speech so it would connect with the younger audience. His ability to adapt to a more youthful crowd has been compared to past political luminaries such as Ronald Reagan and Ron Paul. Andrew Coffin, vice president of the YAF, noted that the presidential candidate had an affinity for laughing in the face of negativity, akin to Reagan.

His speech for the students contained numerous pop culture references, in particular a satirical mockery of an episode of True Blood that involved vampires attacking attendees at a fictitious, Cruz-sponsored fundraiser. He also humorously recalled the actions that helped him win the Senate seat in 2012, including an animated commercial of his going viral, which he credited to his more youthful supporters. “The thing that was cool about it was that we had nothing to do with it,” he noted, applauding the enthusiasm of his young supporters.

Weaved in between the references to pop culture and social media were critiques of the foreign policy of not only Obama but Clinton as well, in addition to laments on the lacking employment prospects for college graduates. In reference to foreign policy he noted, “Our friends and allies, they don’t trust us, and our enemies don’t fear us.” The audience later erupted in applause when he voiced his support of Israeli Prime Minister, Benjamin Netanyahu.

Previously, at the initial announcement of his bid for president, the candidate came under fire for seeming biased towards evangelicals and the religious right. As he officially begins his campaign however, Cruz has taken a more secular approach. Shortly after speaking for YAF at the Radisson, he made his way to the Portsmouth Country Club where he stated that if elected, one of his primary goals would be to repeal Obamacare, in addition to eradicating the IRS.

There are still some who are very skeptical of Cruz. Some have suggested that even as he seeks to broaden his appeal, he is still focusing too closely on appealing to social conservatives, in effect alienating everyone else. Having drawn criticism from both Republicans and Democrats, there have been predictions that his campaign is going to end as quickly as it has started. There has also been suggestion that he lacks the experience to handle being the President of the United States.

So far, Cruz has been well received at each of his speeches. At both the Radisson and the Country Club, both of the crowds numbered well over 100. Cruz faces many obstacles as he officially begins his official campaign trail, but he has won many people over with his enthusiasm and upbeat attitude.